A Publicity volunteer explains how their branch carried out a successful Twitter campaign.

Chris Ayers is a Publicity volunteer at our Chiltern Branch 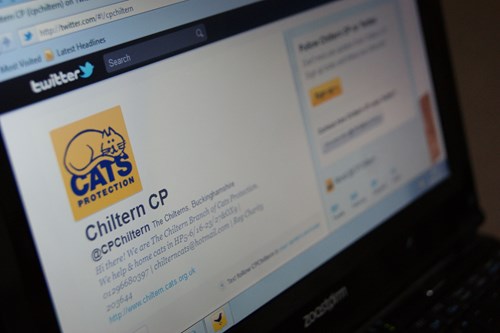 Twitter is one of the most powerful tools of our time. It has contributed to the downfall of regimes in Egypt and Libya, taken some credit for the cause of the London riots – then proceeded to be vital for the cleanup operations – and has been responsible for heavily degrading the integrity of the ‘Super Injunction’. Opinion is split, but I am fanatical about social networking and believe that it holds the key to untapped volumes of publicity. Luckily, Cats Protection at both a national and local level is making excellent use of Twitter and, at the time of writing, around 50 branches hold accounts.

On 13 August, I had the idea of holding a ‘tweetathon’ – where a Twitter user repeatedly Tweets all day about either a specific subject or range of subjects in a pre-organised fashion, generally for the purpose of gaining rapid publicity – which includes building up as many ‘followers’ as possible. This idea steadily developed, although was downsized as I didn’t want to promise something which I couldn’t deliver – the idea of tweeting every few minutes seemed excessive! Finally, I settled on a ‘flash-neutering campaign’ as a bit of a play on the terms flash mob and flash crowd which captures the sheer essence of social networking.

I settled on a neutering campaign – for Monday 15 August as it is something which needs maximum publicity to try and humanely reduce the cat population – and which is geographically applicable everywhere. Somebody could be looking at our Twitter from another branch area or abroad and this means that anybody can participate. From the morning until the evening, I had set up various scheduled tweets with Tweetdeck software highlighting key neutering points, as well as writing others ad-hoc and replying to/retweeting other people’s tweets on the subject. To break this down further I gave details on providing information about the Cats Protection ‘free neutering’ vouchers – within our branch area as well as giving the national CP email address – various ‘bullet point’ facts such as ‘One unneutered cat could be responsible for thousands of descendents in just five years’ as well as links to the Early Neutering Register and Neutering FAQ.

Ultimately this was very successful and there are various ways to measure this – we had 40-50 retweets – where one of our tweets is reposted on another’s account because they think it’s useful or interesting, meaning all of their followers can see it too. If the average Twitter user has anything between 50-500 followers and a tweet is retweeted 10 times, a minimum of 500 people will see that tweet – or maybe even thousands upon thousands if a celebrity or well-followed organisation/company retweets, as well as the 300 already following us. You can see why information travels so quickly online! It is relatively safe to assume that at least 2,500 people will have seen at least one of our neutering campaign tweets over the course of the day.

In addition, we gained 12 new followers in a day. This doesn’t sound like a lot, but surges of new followers such as this are always good news, especially to relatively light Twitter users like us. To put it into perspective, our Twitter account has been running since 2010 and, in a year or so, has gained 280 followers – an average gain of roughly one follower every two to three days. I would most certainly implore any branch to register a Twitter account, use the guides available and help from the National Cat Centre to get established. It’s ultimately free publicity with a potentially huge audience. 18 per cent of the British public use Twitter, so if you can potentially broadcast to them directly, easily and for free – why wouldn’t you?

I'd recommend using TweetDeck: the ultimate Twitter application. It's great for scheduled tweeting and viewing Twitter in a far more user-friendly way.

Why I foster for Cats Protection