Cat owners cited a number of reasons for not neutering or delaying neutering:

Read the press release below 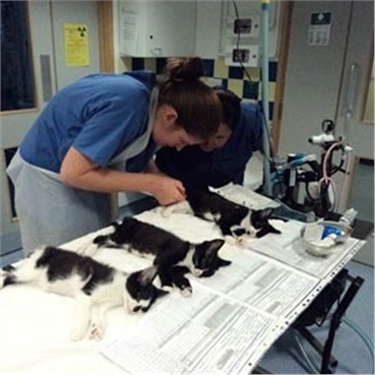 Cats Protection research has also revealed that only 4% of cat owners neuter their cat at or before four months of age.

Cat owners cited a number of reasons for not neutering or delaying neutering, with 22% of the respondents stating it was cruel and 14% fearing it would change their pet's personality. Many respondents also believe that kittens couldn't conceive until they were five to six months old.

Cats Protection is keen to debunk these myths.

Jane, Cats Protection's Neutering Manager, said: "Neutering not only has health benefits, such as the prevention of tumours and infectious diseases, but kittens also recover much quicker and the surgery is easier. It can stop male cats from spraying, fighting or straying and female cats wailing when in heat.

It is common for cat owners to wait until the cat is 'older' but cats can get pregnant at a very young age.

It isn't true that cats should have a litter before being neutered and neutering at breeding age and before a first litter is the kindest thing."

Research by Cats Protection has revealed that one unneutered female cat can be responsible for an astonishing 20,000 descendants in just five years.

Concerned with combatting the unwanted cat population, Cats Protection is promoting its Kitten Neutering Database (KiND) which helps cat owners easily locate the nearest vet who will neuter at four months or younger.

Jane is urging cat owners to utilise the search facility and ensure their cats are neutered at the earliest possible stage.

She said: "Cat owners may not be aware but kittens can become pregnant from four months of age.

More than 900 practices have signed up to the Kitten Neutering Database. For more information or to locate the nearest veterinary practice which neuters at four months or younger click here