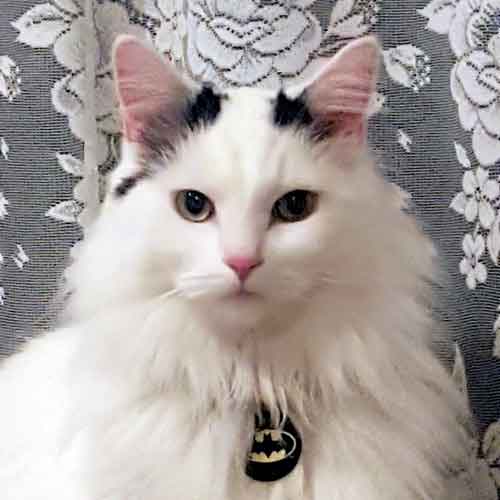 Struck with anxiety from a young age, Eve always just thought of herself as a ‘worrier’. However, in January this year she suffered a complete mental breakdown and was signed off from her job as a nursery nurse, which she found very difficult to come to terms with. Eve later resigned in order to take a complete break and find out who she was again.

During a therapy session in early March, Eve came to the realisation that she had often based her life around the needs and opinions of others and was encouraged to think about what she really wanted, a cat.

Despite being told that Dusty was quite a shy cat, within two minutes of entering his pen, Eve was able to stroke him and spent the next hour getting to know him.

The next challenge was to see if Dusty would be ok with Eve’s husband Stuart, as there was a note on his record that he didn’t get on with men. Happily, the pair also hit it off well and Dusty seemed totally at ease. Eve was so relieved that she reserved him that day and on 12 March, she took him home.

Cats Protection conducted the research as part of its More Than Just a Cat campaign, which highlights the many ways cats enhance and enrich people’s lives. It showed that 93.5% of cat owners think that owning a cat has a positive effect on their mental wellbeing¹.

Eve added: “Seeing him (Dusty) for the first time it was love at first sight and the rest is history. That was when I was at the worst of my breakdown and I feel he came to me just in time,” said Eve.

“I’m so grateful to Cats Protection for bringing Dusty and I together. He has saved me and given me a purpose as well as more love and affection that I ever expected. He’s always with me and will help when I’m not feeling myself by nudging my hand and being even more affectionate than usual.

“Since having him in my life, my confidence has started to come back and I’m in a much better place and I absolutely believe he has played a huge part in improving my mental health.

“Dusty is so much more than just a cat, he’s my little angel.”

To get involved with the campaign, visit www.cats.org.uk/my-cat-is or Cat Protection’s social media pages (Cats Protection on Facebook and @CatsProtection on Twitter and Instagram) and use the hashtag #MoreThanJustACat.

To see cats in need of homes in your area visit www.cats.org.uk/find-a-cat

For further information, photos or an interview, please contact Cats Protection’s Media Office by emailing on 01825 741 911 or email media.office@cats.org.uk

¹The survey of 2,000 cat owners was conducted for Cats Protection by 3 Gem Research and Insights during August 2019