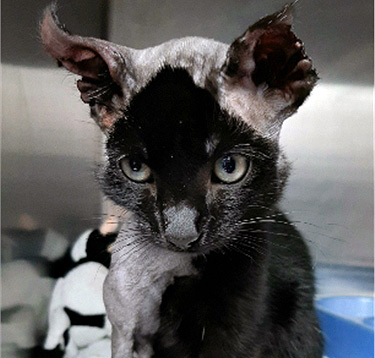 Named Inky by vets, the black 10-week-old kitten had suffered a complicated break to his right foreleg and his ears had also been singed.

Inky is now being cared for by staff and volunteers at Cats Protection’s Belfast Adoption Centre which is appealing for donations from the public to help pay for Inky’s operation and aftercare, expected to cost at least £800.

Deputy Manager of Cats Protection’s Belfast Adoption Centre Andrew Doherty said: “It’s not known how poor Inky broke his leg so badly, but we think he probably burned his ears when he was hiding inside the hot car engine.

“His leg was so badly damaged that, sadly, the only option was for vets to remove it. It’ll take Inky a few weeks to recover from the operation, but so far he’s taken it in his stride.

“He’s a very friendly and relaxed kitten and is enjoying all the fuss and attention from volunteers and staff at the centre.

“Inky isn’t yet available for rehoming, but anyone interested in offering him a new home can keep any eye out for him on our website.

“He’ll be able to do most things cats do on his remaining three legs, but as he won’t be able to scale fences or escape from potential dangers as well as four-legged cats can, he’ll be looking for an indoor home.”

If you’d like to help the adoption centre pay for Inky’s treatment, you can donate to the JustGiving appeal at: www.justgiving.com/fundraising/cats-protection-helpinky

Andrew said: “We’d be extremely grateful if anyone who would like to help Inky could donate to our appeal – every penny will make a huge difference and help us pay for his operation and continued aftercare.”

As a member of the public found Inky and took him to vet in East Belfast before he came into Cats Protection’s care on Friday 21 June, the exact location and circumstances of where he was found aren’t known.

You can find out more about the work of Cats Protection’s Belfast Adoption Centre in Belfast Road, Dundonald, at: www.cats.org.uk/belfast

Photos and a video clip of Inky are available from the Cats Protection media office on request.