A finalist in the £50,000,000+ category, the charity went on to win the people's choice which was selected from the 50 films and videos and was presented by actor Sally Phillips. 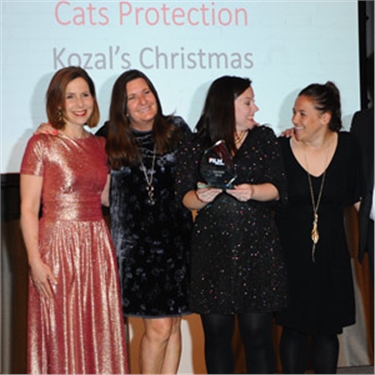 Based on a true story, the animation Kozal's Christmas aimed to raise awareness of the charity's rehoming work.

It tells the story of 16-year-old Kozal the cat who spent seven months being overlooked before finding a new home.

Digital Engagement Manager Gemma Croker said: "We were so delighted to win this as it shows how Kozal's story resonated with the public. We have so many older cats in our care looking for loving homes so we really hope it encourages more people to consider adopting one."

Nearly 400 charities enter the Charity Film Awards each year with 50,000 votes from members of the public.

Cats Protection has thousands of cats in care in need of new homes. To find out more, please visit our Find-a-cat tool.