A cat who has stowed away on a potato harvest tractor three times in the last seven years has once again been reunited with his family, just in time for the new year

Twelve-year-old Oliver seems to have a taste for adventure as each time he has gone missing it has been during harvest time at the farm next door.

He then turns up in Arbroath, six-and-a-half miles away from his home in Carmyllie, before being reunited with his owners by Cats Protection, thanks to his microchip. 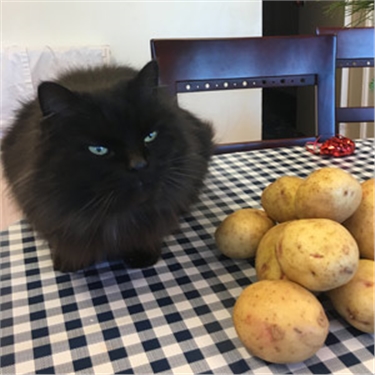 Oliver’s owner, John Preston, said: “Oliver’s jaunts started seven years ago when he went missing for five months. We were distraught and had almost given up hope of ever seeing him again when we heard from Cats Protection that he had been found.

“He’s a friendly cat but quite timid with people he doesn’t know, so we think the reason it takes a while for him to be identified is that it takes him time to trust people enough to let them get close to him.”

In 2013 Oliver went missing for a few weeks before being returned home. It was then hoped that his wandering days were behind him, until he disappeared again this October, this time for two months.

John said: “Even though this was the third time Oliver had gone missing, it doesn’t make it any less worrying. As the weeks go by you do start to fear the worst, so we are incredibly happy to have him home safely again, particularly in time for Christmas and New Year.’

Sharyn Wood, Co-ordinator of Cats Protection’s Arbroath & Carnoustie Branch, said: “This is a great example of just how important it is for cats to be microchipped. Cats Protection takes in thousands of stray cats each year and sadly many of them are never reunited with their owners, despite our best efforts. We’d love all cats to be chipped to ensure many more happy reunions.”

Cats Protection is calling for microchipping to be made compulsory for owned cats in the UK and highlighted this as a priority in its 2022 Agenda for Cats, which was released in May 2017 ahead of the General Election, urging politicians from all parties to support measures to protect cats from abandonment, harm and neglect if they were elected.