Cats Protection reveals that older cats aged 11+ take an average of one month to find a new home - over three times as long as kittens who take just eight days.

Eager to give the oldies a boost, the charity has created Mature Moggies Day (16 June 2021) to remind people of the enormous benefits of adopting a senior kitizen, to share inspirational stories and provide information and advice.

In order to understand why older cats are being overlooked in favour of fresher-faced felines, Cats Protection commissioned a survey which showed that 23% of respondents would consider any cat aged over five years as ‘older’.  In fact, a five-year-old cat is only 36 in human years and a cat generally isn’t classed as a senior until it reaches 11 years of age. 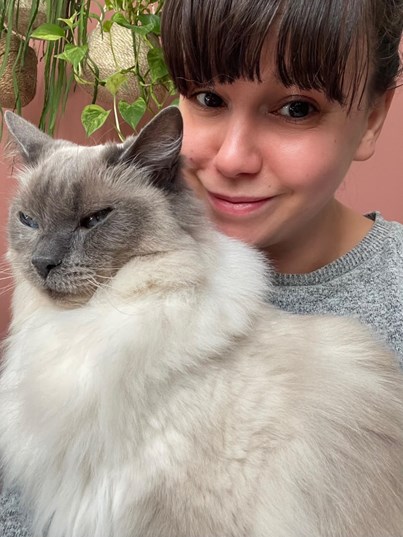 Under a quarter of survey respondents said they woul

Becky Piggott, Cats Protection Senior Cat Care Assistant and long-standing mature moggy devotee, says: “I am absolutely passionate about older cats and have adopted 14 of them over the years.  I am currently the proud owner of Brigadier Monty Bojangles who is a very young-at-heart 15-year-old!

“Offering a loving retirement home to an older cat is incredibly rewarding.  Older cats have just as much to offer as kittens – they tend to stay closer to home, are very affectionate and provide amazing companionship.  With improvements in cat care, the quality of life for older moggies has greatly increased so people definitely shouldn’t be put off adopting one.”

“My Oliver may be 15 but you wouldn’t know it - he certainly doesn’t!  He rules the roost, gives the best cuddles and makes me laugh every single day. The fact older cats take three times longer to get rehomed than younger ones is such a shame as they have so much to offer a home.”

“All cats adopted from Cats Protection have been fully health-checked and come with a full medical history and four weeks’ free pet insurance which will cover any new conditions that arise after adoption.”

For further information or an interview, contact Cats Protection’s Media Office on 01825 741 911, at media.office@cats.org.uk, or @CPMediaTeam on Twitter.