A Wrexham pet owner enjoyed an emotional reunion with her cat after he went missing for two months – and all just in time for Kiss a Ginger Day* (12 January 2019).

Susan Kovacs and adventurous cat Thomas saw each other for the first time since he went missing when she collected him from Cats Protection’s Wrexham Adoption Centre on Monday 7 January 2019.

Susan of Drefechan, Penycae, said: “I’m absolutely made up to see Thomas again and be able to give him a great big kiss. I can’t wait to get him home and settled in. 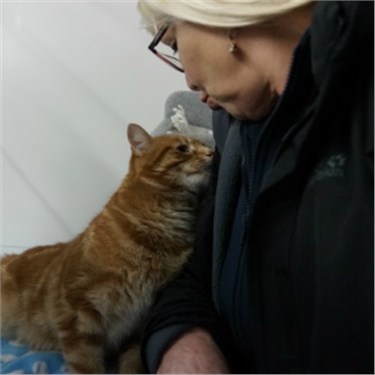 “I couldn’t believe it when I heard Cats Protection had Thomas in its care and he was safe and well – I was devastated when he went missing and after so many weeks had gone by I was convinced I’d never see him again.

“Thank goodness I’d had him microchipped so they could let me know he’d been found.”

Thomas was found living near Subway, Starbucks and the Travelodge in Rhostyllen - four-and-a-half miles away from his home.

Kind staff and customers of the businesses were concerned about Thomas – or Teriyaki as he had become known – and posted pictures of him on a lost and found Facebook page.

He was then taken to Cats Protection’s Wrexham Adoption Centre on Sunday 6 January 2019.

Cats Protection Wrexham Adoption Centre manager Suzan Kennedy said: “We were so pleased to see Thomas reunited with Susan - this amazing story shows the importance of microchipping cats and keeping the contact details up to date.

“We were able to reunite Thomas with his overjoyed owner quickly and easily - without a microchip, sadly that may never have happened.

“Microchipping is the most effective way to identify a lost pet and increase the likelihood of a happy reunion if a cat goes wandering.

“The procedure itself is simple, doesn’t cause any harm and once chips are inserted, cats are unaware of their presence.”

It’s not known for sure how Thomas strayed so far from home, but it’s thought he may have climbed into a vehicle and didn’t know how to find his way home.

* International Kiss a Ginger Day celebrates people with ginger hair – but Cats Protection thinks it’s also a purrrrfect opportunity to make a fuss of felines of the ginger fur variety.

It’s okay to kiss your cat as long as both owner and cat are healthy, the cat is well socialised and used to this level of human contact.

Avoid kissing on the lips for hygiene reasons and avoid the stomach as many cats don’t like being touched in this area!
Cats tend to prefer brief interactions and greetings tend to be nose to nose.