Cats Protection’s Sleaford & District Branch is searching for the owner of a black cat whose microchips details are out of date. 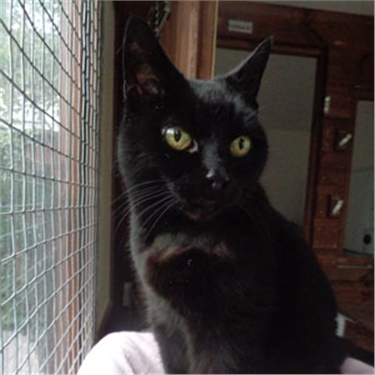 Although Tilley has a microchip, which revealed her name, the owner’s details are out of date so they cannot be contacted.

Registered as missing on 8 September 2011, 17-year-old Tilley was originally from the L25 postcode area of Liverpool. Seven years on, Tilley has ended up in Lincoln, over 130 miles from her original home.

Tilley has been described by volunteers as being a petite cat with a shorter-than-average tail.

Thousands of cats go missing every year and research by Cats Protection found that sadly almost half never return.

Karen Sheldon, Coordinator at Cats Protection’s Sleaford & District Branch, said: “Tilley is a sweet-natured pure back cat who is in very good condition, despite being 17 years young. Having been reported as ‘missing’ over seven years ago, the best present this Christmas would be reuniting Tilley with her original owner.

“As a charity that reunites 3,000 cats with their owners across the UK every year, we always recommend microchipping as a safe and permanent method of identification to increase the chance of being reunited. However, it is very important pet owners keep their details up to date soowners should check their certificate, which will tell them how to do this.”

Microchips contain unique identification numbers that are inserted under the cat’s skin between his shoulder blades. The number is linked to a database containing details of the pet, as well as the owner’s contact details. When a scanner detects the microchip, a simple phone call can ascertain the owner’s details and the pet can then be quickly returned home.

“If anyone finds a stray cat we’d urge them to get it scanned as soon as possible in case it has a microchip,” added Karen.

“We really hope to be able to reunite Tilley with her owner but if this is not possible we will need to find her a new loving home in the New Year. Anyone who is interested in adopting Tilley if her owners don’t come forward is welcome to get in touch.”

Further advice about what to do if you have lost or found a cat on the Cats Protection website at www.cats.org.uk

Anyone who recognises Tilley, please get in touch with Cats Protection’s Sleaford Branch by emailing lostandfound@sleaford.cats.org.uk or by calling 0791 751 7394.