No one was sure Bobcat would live to tell the tale when he was found with half of his tail hanging off.

But thanks to a kind member of the public who alerted Cats Protection volunteers to his plight, Bobcat received the lifesaving veterinary treatment he so desperately needed.

“Poor Bobcat was in a terrible state when we first saw him - his tail was snapped in half and it looked extremely painful, so we took him to a vet for emergency treatment,” said Cats Protection branch co-ordinator Glynis Davies. 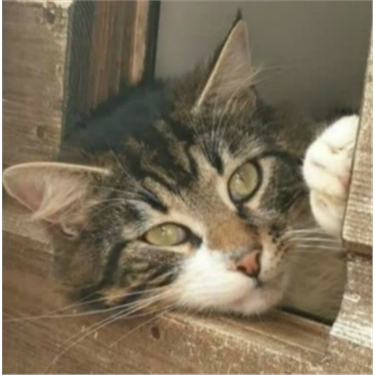 How he was injured remains a mystery, but his tail was so badly broken that vets decided to amputate it.

Glynis said: “Thankfully Bobcat soon recovered from the operation so he’s now bright eyed, just not quite as bushy-tailed as he once was.

“He’s managing extremely well without a tail and is already at Cats Protection’s Exeter Axhayes Adoption Centre, looking for a new home.

“Bobcat’s a very friendly and affectionate boy who would love a home where he’ll get plenty of fuss and a warm lap to sit on.”

Bobcat was initially cared for by volunteers at Cats Protection’s Gwent Branch after he was found in Blackwood on Tuesday 5 March 2019.

If you’re interested in adopting Bobcat or finding out more about adopting a cat, please visit the Exeter Axhayes Adoption Centre, Clyst Honiton, or call 01395 232377.

This year Cats Protection’s cat care assistants - who help look after cats like Bobcat at Exeter Axhayes Adoption Centre - are being funded thanks to players of People’s Postcode Lottery, who have raised £404 million to-date for similar good causes.