The trio of three-day-old kittens were abandoned when their feral mother was unintentionally disturbed by a cat-loving member of the public who walked into the garden where the young family was sheltering just days after the kittens’ birth. 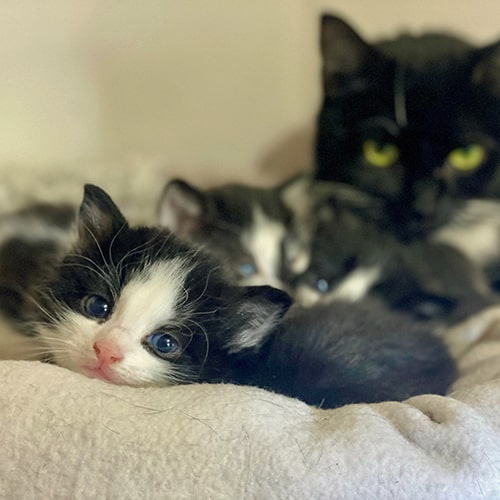 Despite immediately keeping her distance, the cat-lover watched as the mother fled the scene with one of her five-strong litter. The lady immediately contacted Cats Protection’s Cornwall Adoption Centre where centre manager, Libby Jepson, advised to monitor the situation from a distance. The mother returned for one more of the litter but by early evening she had not been back for the remaining three kittens and Libby knew they were unlikely to survive if left alone.

Libby explains: “Feral cats are terrified of humans so we want to have as little contact with them as possible. In this situation the kittens had been left for over two hours since the mother had first been frightened away.

“Although she may have returned, at around three days old kittens cannot maintain their own body temperature and need continual feeding. I was worried that even if their mother did come back, her kittens would be too cold and hungry to survive or another animal would prey on them once it got dark, so we made the decision to bring them in, maintaining social distancing throughout.”

With the centre only having skeleton staff owing to the current lockdown situation, Libby has taken on the responsibility for hand-rearing the one female and two male kittens. She says: “All three of the kittens are currently doing really well and need to be fed every two and a half hours, day and night. They will stay with me for the next couple of weeks and then once there is a little more time between feeds I’ll be able to share the responsibilities with other members of staff.

“The kittens are really vulnerable so we have named them after some of the most inspirational people we could think of; grey-and white Nye is named after Aneurin (Nye) Bevan who founded the NHS; tabby-and-white AJ is named after AJ Cronin whose book The Citadel paved the way for the NHS, and tabby Elizabeth has taken her name from Elizabeth Garrett Anderson, the first woman to qualify in Britain as a physician and surgeon.

“We hope their names bring them the strength they will need to thrive but also provides a small nod of recognition to the people who created the healthcare system for which we are all currently so grateful.”

The tiny trio will not be ready to home until they are at least eight weeks old but anyone wishing to give them a home once rehoming restrictions are lifted should keep an eye on www.cats.org.uk/cornwall for details of their availability.

For any other cat related advice or emergency care during the Covid-19 outbreak please visit https://www.cats.org.uk/help-and-advice/coronavirus or call the charity’s central National Information Line on 03000 12 12 12.
~ ends ~

Pictures of all three kittens plus AJ, Elizabeth and Nye each being bottle-fed can be downloaded here:
https://www.dropbox.com/sh/jrwta6hi7fdact5/AAB_s4rIsx8funtKe2cE-PWQa?dl=0