Do cats make good fathers to their litter of kittens?

This post has been written by Behaviour Manager, Nicky Trevorrow.

At a time when many of us are celebrating Father’s Day, curious cat lovers may be wondering about feline fathers. Do male cats make doting fathers or are they absent? Certainly it is not something you commonly hear about. This blog post aims to shed light on this little known topic. 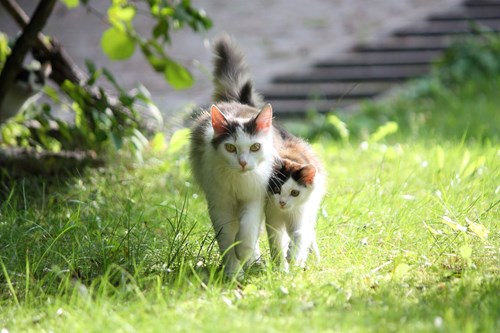 The first thing to note about cats is that they are one of the few domesticated animals that have retained a large degree of control over breeding and mate choice. As such, this means that we often do not know who the father is. Generally, it is only pedigree cats whereby a female or queen is taken to a male stud cat and therefore both parents can be identified. Of course, even pedigree cats can have accidental litters!

One study in Southampton which looked at paternity in kittens discovered some interesting results. One of the households with a litter of kittens in the study had a male and female cat which were both unneutered. However, when the paternity test results came in, none of the kittens were fathered by the male cat living in the house. In fact, the kittens were all fathered by a feral tom cat from a farm a few miles away – and this feral cat had actually fathered many of the kittens in the study! Clearly this virile male cat needed to be neutered in order to prevent the many unwanted litters. Kittens can get pregnant as young as four months of age, which is why Cats Protection recommends neutering at four months. 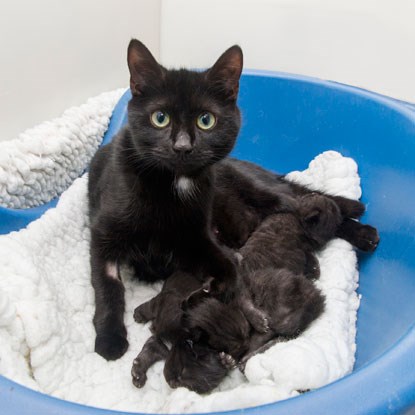 Chaka and her kittens were in the care of our Bridgend Adoption Centre. Photo by Sue Dobbs

A little known fact is that kittens in a single litter can have different fathers. There could even be as many fathers as there are kittens! The ability to produce a litter of kittens fathered by more than one tom cat is called superfecundation. If we consider that the trait for boldness, or how friendly or outgoing the cat is, comes from the father, this helps to explain the differences seen in a single litter not only in the variety of coat colour or length, but also the personality of the kittens. Studies have shown that friendly fathers tend to have genetically friendly kittens, whereas fearful fathers tend to produce more fearful kittens. Of course, there are many other factors which also play a role in the overall sociability and personality of the kittens, including the amount of positive experiences with people and objects during the kitten socialisation period of two to seven weeks of age.

Overall, cats are not known for their fatherly skills as male cats do not tend to be involved in raising offspring, especially in the wild. Anecdotally, there are rare cases reported where domestic male cats have shown paternal care towards the young. Generally, rearing the kittens is primarily carried out by the queen so we don’t expect many kittens to be giving gifts today!

Find out more about cats' needs and behaviour.