A cat missing for nine months is reunited with 10-year-old girl – and her heartwarming reaction is caught on camera.

After searching for her beloved cat, young Katya Harmon had reluctantly accepted that she wouldn’t see Timmy again. The pair had been inseparable since they bonded eight years previously and the loss made 2020 an even more difficult year for Katya. 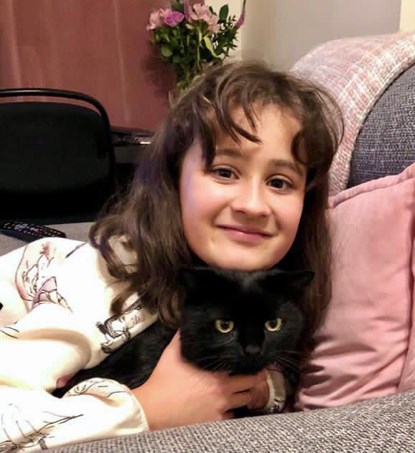 Katya’s father Perry had died of cancer in the summer and the family was so overcome with grief that her mother Svitlana took extended leave from her role as a care home worker to come to terms with the loss and care for Katya.

Timmy went missing when the family moved from Chertsey to Woking in January. He was kept indoors for the first few weeks but, on only the second time being let out in his new neighbourhood, he failed to return home. They searched garages and sheds, knocked on doors and posted on social media, but no sightings were reported.

Katya was inconsolable for weeks, living in hope of his safe return. After being missing for nine months, mum Svitlana felt the time had come to accept that Timmy was gone for ever and she would need to help her daughter heal. The process started with Svitlana getting rid of Timmy’s toys and bedding, unaware that their luck was about to change.

Within days, Svitlana received a ground-shaking call while doing the school run. Incredibly, Timmy had been found safe and well and would be coming home, thanks to him being microchipped. 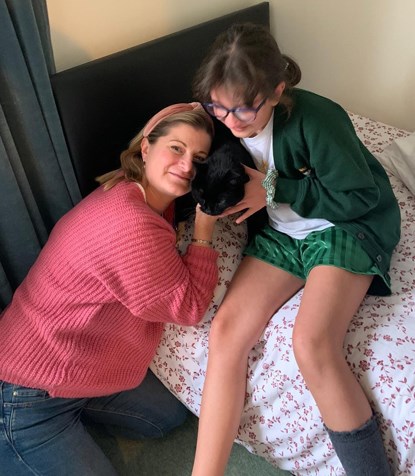 Svitlana and Katya after their happy reunion with Timmy

Pauline Welch, Welfare Officer for our Woking & District Branch said: “We had a report from a lady who had been feeding a suspected stray cat for a couple of months. I went round and scanned him for a microchip, which he had thankfully. While there I looked up the number on our system and saw that it had been registered to an address in Chertsey.”

Although Svitlana hadn’t updated their address on Timmy’s microchip, her mobile number remained the same and the Cats Protection team was able to call and break the happy news.

Pauline said: “The lady who answered was indeed missing her cat Timmy and was over the moon that he’d been found. Her daughter had been devastated when he went missing and had asked her mum that very morning if she’d ever see him again. It’s a heart wrenching story with a happy ending. It certainly brought a few tears to our eyes, that’s for sure.”

Relieved mum Svitlana was bowled over when she took the call, she said: “I had just taken Katya to school when I received a totally unexpected call from Cats Protection. I had given up hope of ever receiving such a call. Timmy was coming home. It was almost unbelievable.

“I knew that Katya would be overjoyed to see Timmy. That was when I hit on the idea of filming that special moment, to capture Katya’s reaction to finding Timmy hiding on her bed.”

No sooner had Pauline made the call than Timmy was delivered back to his home. All the while Katya was at school and couldn’t imagine the surprise waiting for her on her return. Thankfully, Svitlana captured that moment when Katya is reunited with her beloved cat on video.

The joyful return of Timmy went some way to improving a devastating year for Katya and her mum. Svitlana said: “We’ve had it hard this year, like so many people. It has been hard to see any end to it. And then I had a miracle call from Cats Protection. It really brought some light back into our world.

“If it wasn’t for that microchip, we wouldn’t have Timmy home with us now. He won’t leave Katya’s side and she is besotted with him. He came back to us two days before my birthday; that really was the best present I could have hoped for this year.”

Cats Protection’s work is possible thanks to the generous donations of supporters and volunteers, especially during the COVID-19 crisis when fundraising has been hit hard. To donate to the Woking & District Branch and to support cats like Timmy, visit www.cats.org.uk/donate

Timmy’s story mirrors Cats Protection’s tear-jerking Christmas animation created by multi award-winning Aardman Studios. The beautiful three-minute film is inspired by the true story of a young boy and his missing cat, Casper, and highlights the value of microchips for pets.