On top of the amazing total already raised, Shark have committed to donating a further £50,000 each to Cats Protection and Dogs Trust to support our work during a one-year period. We're incredibly grateful for their continued generosity. 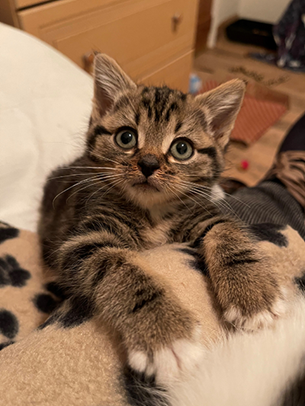 This vital funding will help us look after more cats in need, such as Paddington (pictured), a kitten  dumped on the doorstep of one of our volunteers, and tabby cat, Crumpet, who came into our care when her owner become too ill to look after her.

Thanks to Shark donations, both Paddington and Crumpet are now in loving forever homes

After their tough start in life, Paddington and his siblings were fostered by our Gildersome Homing Centre’s Rehoming and Welfare Officer, Diane Armer, after which Paddington was adopted by Leonie and her family.

Leonie’s mum, Sue, had also recently adopted her cat, Crumpet, from the centre. The pair were a perfect match as Sue, who lives on a farm, was able to provide the outdoor space that Crumpet was used to, having previously lived on a caravan site. Read more about Paddington and Crumpet here.

While our adored furry friends bring many benefits to our lives, their hairs can end up all 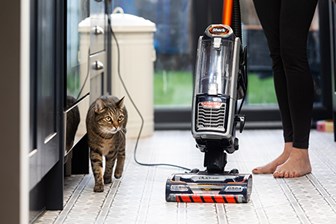 over the house. If you’re a cat owner with spring cleaning on your mind, Shark Cleaning UK’s TruePet vacuum cleaner might be for you. The range is specially designed for homes with pets and is perfect for removing those pesky cat hairs from carpets, rugs and sofas.

You can read more about our partnership with Shark here.