Cats Protection’s Isle of Wight Adoption Centre has joined forces with volunteers on the ground at the charity’s Southampton and Gosport branches to pool their detective skills and discover the truth about a brown cat, thought to be around three years old and currently known as Ivan. 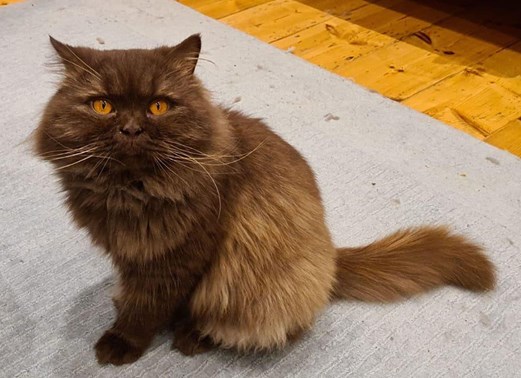 The long-haired enigmatic feline was originally handed over to the Southampton Branch by a kind-hearted couple in October. They had been feeding Ivan in their garden in the Netley Abbey area of the city where he had been sleeping rough for over five months. The couple had let him into their house when the weather turned colder but had to keep him away from their own two cats who were fearful of the unknown cat.

Realising they could not keep him during the winter and wanting to find him a home of his own, the couple called the charity for help. Although the branch scanned Ivan and was delighted to discover the fluffy cat had a microchip, the mystery was just unfolding as the chip wasn’t registered to an address but the number showed it originated in Russia.

Ivan was subsequently transferred to the adoption centre in Ryde where he is being quarantined so that he can receive a rabies vaccination.

Mel Read, Adoption Centre Manager, explains: “Ivan is a real mystery. Other than the five months or more that he was living rough in Southampton, we know nothing more about him and yet somebody must know something. He is very friendly and so may be a long-lost beloved pet who was used to his home in Russia and then got confused once he was allowed outside after a long journey to the UK. Perhaps he was brought over as a kitten. We don’t know if he came in through official channels as part of the PETS scheme so he has been quarantined here at the centre as a precaution.

“We would love to hear from anybody who knows more about him or can help us locate his owner. If we are unable to find an owner we will find him a new loving home but we must do all we can to try and find his original owner first.

“An up-to-date microchip would have made such a difference in this situation and we would urge everyone to ensure their cat’s details are updated, especially if you move here from abroad. It just takes a quick call to your cat’s microchip company, or many can be updated online. If you don’t know which company your cat’s chip is registered to, a vet will be able to tell you by scanning your cat.”

Anybody with information about Ivan should email IsleOfWight@cats.org.uk or call 03000 120 251.

Anybody wishing to donate funds to the charity to assist the centre with caring for Ivan during their quest for his owners should visit www.cats.org.uk/christmas/donate.

Cats Protection is calling for a change in the law to ensure that all owned cats, like dogs, are microchipped.

Microchipping is a safe, permanent and cost-effective method of identification which ensures cats like Ivan can be reunited with their owner should they go missing. It also means lost cats are not mistaken as strays and taken in by rehoming charities. However, Cats Protection’s CATS report estimates there are over 2.6 million cats in the UK that are not microchipped.

Cat lovers can back the charity’s campaign for compulsory microchipping of owned cats by signing its petition at www.cats.org.uk/microchippingpetition

Images of Ivan are attached.