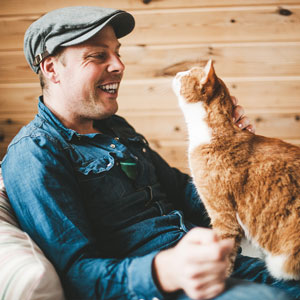 Cats Protection has welcomed an announcement from the Government that it will launch a consultation into introducing compulsory microchipping of pet cats.

The UK’s biggest cat charity says microchipping should become a legal requirement for owned cats, as it already is for dogs. Currently, eight out of 10 stray cats taken in by the charity’s Adoption Centres in England are not microchipped, making it virtually impossible to trace an owner.

Cats Protection’s Head of Advocacy & Government Relations, Jacqui Cuff, said the charity had been campaigning for microchipping to be made compulsory for owned cats and had recently launched a petition on the issue.

She said: “Microchipping is an essential part of being a responsible pet owner and is already compulsory for dogs. Cats are just as popular and well-loved, so it’s only right that this should also apply to owned cats to ensure they have the same level of protection.

“Introducing compulsory microchipping of owned cats would encourage more cat owners to microchip their cats, meaning that lost cats can be identified and returned home rather than handed into rehoming charities as strays.

“It also means that injured cats can be quickly identified by vets and their owners can be informed and involved in their care.

“We’re delighted the Government has shown a commitment towards improving feline welfare and promoting responsible cat ownership in the UK by announcing its plans to consult on compulsory microchipping of cats. We look forward to working closely with Government to take this issue forward.”

Out of 11 million owned cats in the UK, 29% are not microchipped – which makes a total of over three million unchipped pet cats with no permanent means of identification.

Cats Protection is the UK’s largest cat charity, helping around 200,000 cats every year through a network around 250 volunteer-run branches and 36 centres.

During 2018, 82% of stray cats taken in by the charity’s Adoption Centres in England were not microchipped.

The charity recommends microchipping as a safe, permanent and cost-effective method of identification which ensures cats can be reunited with their owners should they go missing. Under current regulations, dogs must be microchipped but this law does not extend to cats where it’s down to owners to decide.

Cats Protection says without microchipping it can be impossible to reunite lost cats with their owners, meaning they may be rehomed to other people.

Lost cats which have recently been reunited with their owners thanks to microchips include:

Quincey: Black-and-white puss Quincey had been missing for over 12 years when he was finally reunited with his family after being taken in as a stray by Cats Protection in August 2019. While his owner Margaret Smith had died shortly after he had gone missing, Quincey was returned to daughter Paula, of Braintree, Essex, thanks to details on his microchip. Paula said: “We honestly never thought we would see Quincey again and the whole family was overjoyed when we got a call to say he’d been found. Even after all these years, he’s still a much-loved family pet and we were delighted to get him back. None of that would have been possible had he not been microchipped and I’m firmly of the view that microchipping is a necessary part of owning a cat.”

Monty: Monty had been missing for nearly two years before finally turning up in a village three miles away. Four-year-old Monty was reported as a stray to Cats Protection’s Bracknell & Wokingham Districts Branch after taking shelter in a garden. A quick scan of his microchip revealed the details of his owners, who had been searching for their much-loved pet ever since he went AWOL from their home in Aborfield in 2017.