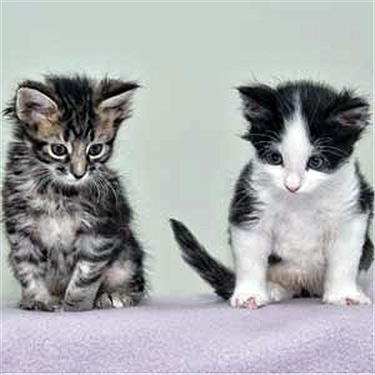 Bert and Ernie both have Syndactylism where two or more toes are fused.

The condition is different to the more frequently seen polydactyly - where a cat can have extra toes on their paws.

A normal cat has four toes on each foot and on the front feet they also have a dewclaw - which is a little higher up on the leg.

“Although very rare, complex Syndactylism – the form which tends to be seenin cats - appears to cause minimal to no discomfort so treatment is generally not recommended,” said Jennifer MacVicar, Cats Protection’s Central Veterinary Officer

“The condition is unlikely to cause problems but Bert and Ernie will need to be monitored as they grow for any sign of lameness. Syndactylism is potentially inherited and could be passed on to their offspring so, like all the cats in our care, Bert and Ernie will be neutered when they reach four months.”

The kittens were believed to be under two weeks old when they were found in Wakefield in mid-May.

There was no sign of their mother when they were discovered so the charity believes it’s possible she may have rejected them.

“We weren’t sure Bert and Ernie were going to make it but they’re growing into two lively boys,” said Rob Wilkinson, Cats Protection’s Gildersome Centre Manager. “All the staff have taken it in turns to hand rear and they’re now being looked after in a volunteer’s home. They both seem perfectly happy and mobile.”

Bert and Ernie will be monitored by the charity’s vets until they are ready to find a new home.

Cats Protection’s Gildersome Homing Centre is part of a national network of over 250 volunteer-run branches and 36 centres that help around 200,000 cats and kittens each year.