Jess is now 17-years-old and vanished from a family friend’s home on Mayfield Road in May 2007. He had been staying there while his owners had to move into temporary accommodation which did not accept pets while they waited to move house.

Owner Leigh Bateman, a self-employed cleaner from Ryde, was happily surprised when she received a call from Cats Protection’s Isle of Wight Adoption Centre to say Jess had been brought into them as a stray. 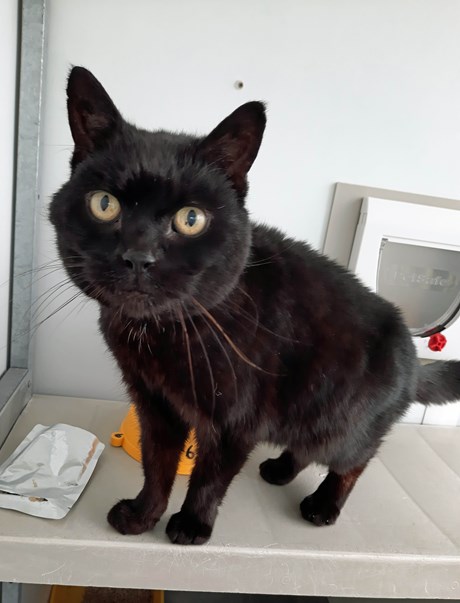 Leigh explains: “Jess went missing after we let him and our other cats out into our friend’s garden. It was a month after they arrived so we thought we’d given them plenty of time to get their bearings. We looked everywhere but he was nowhere to be seen.  About six weeks after he vanished a neighbour amazingly spotted him back where we used to live, three miles away in New Road in Wootton but they hadn’t been able to catch him. We thought he was lost forever.”

And yet the adventurous all-black cat found a new home not far from where he had gone missing and took shelter in the grounds of the Ryde House Group on Ryde House Drive, where residents kept him well-fed and affectionately named him Tibby. It wasn’t until Jess began showing his age in recent weeks that staff decided he should have a home of his own and took him to Cats Protection.

A spokesperson for the Ryde House Group says: “Tibby, as we called Jess, found his way to our doorstep around 13 years ago, and made such a regular appearance that he was dubbed 'The Ryde Cottage Cat'. You can even see him on our site map, as he was so often spotted along that driveway.

“Over the last few weeks, he was starting to show his age and we had the sad realisation that he needed to be brought to a place that could give him the care he needed. We were so sad to see him go but are so glad that he's been reunited with his original owners. We’d like to say thank you to Jess for bringing smiles to the faces of our residents and staff for so many years.”

Once there he was scanned for a microchip and luckily Leigh had kept her details up-to-date meaning she and Jess were reunited after just one phone call.

Leigh adds: “We so surprised to get the call and we’re so pleased to have him home. Jess is now my oldest cat, he was born on the mainland in February 2004. We brought him and our other cats, including his mother Sooty, brother Pilchard and sister Jet over to the Island from Snodland in Kent. Some of them, including Pilchard, have passed away over the years but we’re looking forward to gradually introducing them again.

“I was quite amazed that Jess seems so happy after living outdoors all this time. I wish he’d been scanned for a chip sooner but thank goodness we’d kept his details up-to-date so we could be found. He’s enjoying a room of his own with plenty of food, warm blankets and all he could need. I truly can’t believe he’d back with us after all these years.”

Jo Morrison, Deputy Manager at Cats Protection’s Isle of Wight Adoption Centre, says: “Wow, the power of the microchip! Jess’s story just goes to show why we microchip all cats before they leave our care at Cats Protection. We might never have known Jess had owners who missed him if it weren’t for his chip.  It was wonderful to be able to reunite Jess and Leigh and for him to go home to his family.  It’s always a joy when we scan a cat and the scanner says it’s not only found a chip but then the details are up to date. My message to everyone would be ‘chip your cat’ – it makes reuniting cats and owners so much easier.”

It is estimated there are 10.2 million owned cats in the UK - 2.6 million (26%) of which are not microchipped, according to Cats Protection's CATS (Cats and Their Stats) report 2020.

Cats Protection is calling for microchipping to become a legal requirement for pet cats, as it already is for dogs. Compulsory microchipping would significantly improve the welfare of cats in the UK - making them easier to identify if they are lost, injured or killed while outdoors.

A Government consultation into making microchipping of pet cats compulsory closed on 17 February 2021 and its findings are expected later this year. In the meantime, animal lovers can register their support for the measure by signing Cats Protection's petition at www.cats.org.uk/microchippingcampaign

For further information about the work of Cats Protection’s Isle of Wight Adoption Centre visit www.cats.org.uk/isleofwight