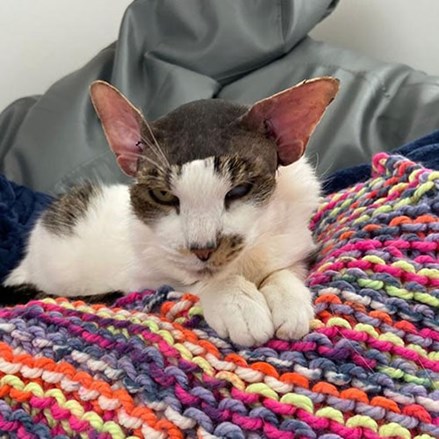 When Spot was admitted in to the care of the Lichfield & Tamworth Branch of Cats Protection, it became obvious that poor Spot was suffering.

Investigations by vets discovered multiple growths in both ears - that may have been spreading for years - were causing continuous painful infections.

Despite attempts to treat Spot with antibiotics, it was concluded that he would only get better after an operation to correct the problem.

Now sporting a shaved head, 11-year-old Spot is slowly recovering at the home of a volunteer fosterer, where he is getting lots of love and attention.

“Spot really is a super duper cat. I have never seen such an affectionate cat that craves attention,” said Sue Hocknell, welfare and neutering team leader.

“Because he was left alone for so long, the growths had begun to affect his hearing. The necessary operation has unfortunately affected his hearing further.”

“He is recovering slowly, and we are doing our best to make sure he doesn’t scratch at his stitches!”

Such was the complexity of the investigations and subsequent operation the Lichfield & Tamworth Branch of Cats Protection is hoping cat-lovers will help it cover the costs.

It hopes to raise £2,500 through its Justgiving page (www.justgiving.com/fundraising/lichfield-and-tamworth-catsprotection1), with anything received above this target used to support other cats and kittens in care.

It will take some time for Spot to recover enough for him to be rehomed, but there are plenty of other cats and kittens in the care of the Lichfield & Tamworth Branch awaiting new homes.

To enquire about adopting, or to learn more about the Lichfield & Tamworth Branch of Cats Protection, call 0345 371 2741 or email enquiries@lichfield.cats.org.uk.