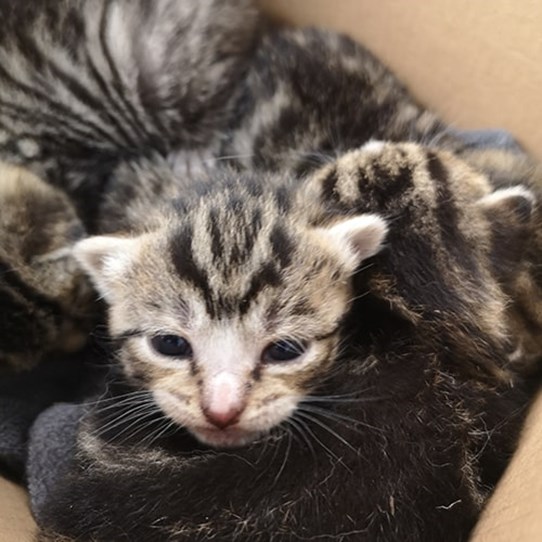 Cats Protection mobilised staff from two of its Norfolk adoption centres, thanks to a quick-thinking passer-by who rescued the desperate kittens from under a bush.

At around three weeks old, the little mites were not strong enough to fend for themselves and would have struggled to survive if they had not been found so quickly and rushed into the expert care of Cats Protection.

The dramatic rescue started on Saturday morning, when a man appealed for help at Cats Protection’s Downham Market Adoption Centre.

Centre Manager Lindsay Tempest, said: “He rushed down our drive and said that he had a number of feral cats in his garden in Outwell. Sadly, one of them, the kittens’ mum, had been found dead in Stow Road that morning. He had seen her moving some kittens under a bush a few days before and he was desperate for our help.

“We told him to bring the kittens straight to us and, within a very short time he returned with four tiny kittens in a cardboard box. Amazingly, they were clean, warm and a good weight. They’d obviously had their breakfast with mum just before she tragically ventured onto the road, so they had a fighting chance.”

The tabby kittens’ tender age meant they would need to be hand reared, which presented its own problems.

Lindsay said: “Normally this would not be an issue but we are working on a skeleton staff during lockdown and didn’t have anyone here to help. Thankfully, our neighbouring Dereham Adoption Centre arranged to take them in and just a few hours later they were safely snuggled up, receiving around the clock care from one of their team.”

The kittens will remain in care until after the lockdown restrictions have been lifted and they are well enough to find new homes. Cats Protection is accepting only emergency cases during the COVID-19 restrictions, in line with government guidance.

The Downham Market Adoption Centre has offered to help control the feral colony under its Trap-Neuter-Return (TNR) programme, which should resume once lockdown is over. TNR involves humanely trapping feral cats so that they can be spayed or snipped and then returned to their outdoor homes to enjoy a healthier life.