Casper's Magical Journey is inspired by a true story 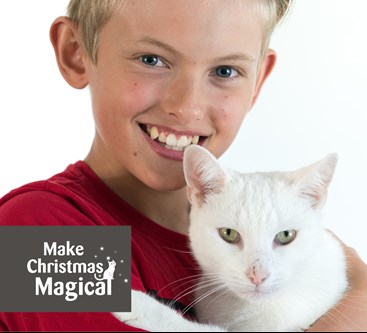 Casper’s Magical Journey, created by the amazing team at Aardman, shares the touching true story of Casper, a mischievous white moggy, and his adoring young owner, Daniel. You may also recognise the familiar voice of Holly Willoughby, who kindly donated her time to the project, starring as Daniel’s mum.

Five-year-old Casper went missing from his home in Plymouth in 2017. Those of you with your own feline friends will be able to imagine the heartbreak this caused for Daniel, who was seven at the time, as well as his worried mother, Anna. Casper was at the heart of their home and life just wasn’t the same without him. All Daniel wanted for Christmas was for his best friend to come home.

As days turned to months then into years, it was looking increasingly unlikely Casper and his family would ever be reunited, however, earlier this year, after an epic adventure, Casper turned up 55 miles away at our Cornwall Adoption Centre, near Truro! Thanks to the magic of his microchip, we were able to reunite Casper with his overjoyed family. Now, Daniel and Anna can’t wait to spend another Christmas snuggled up with their much-loved moggy.

We’re proud to have helped reunite 2,500 cats with their owners last year. Casper is one of many lucky cats whose stories could have been very different without a microchip.

You can find out more about Casper’s Magical Journey and how you can help us reunite more cats with their families here.