Thomas’ neck wound, possibly caused by an ill-fitting collar, has cost our Breckland Branch more than £1,000 in vet bills.

Poor Thomas was spotted in a layby, miles from any houses, in Thetford Forest in East Anglia.

A woman grew concerned when she noticed the cat hadn’t moved as she drove past several times. Sensing something was not right, she contacted our Breckland Branch for help. 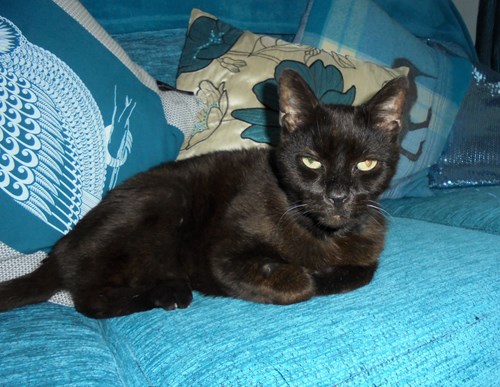 “The poor boy was in pretty sad shape,” said branch volunteer Rita Thompson. “Our first thought was that his wound had been caused by mange or a particularly bad allergy but he didn’t even have fleas.

“It could have been an infected collar injury that went from bad to worse. Even though fur has grown back around his wound there is a white line where it hasn't returned, which could indicate a collar that was too tight.”

Vets treated Thomas, who is thought to be 12 years old, with antibiotics for infection and samples were taken to check for ringworm. Further checks revealed that he had high blood pressure, which will need to be managed with a daily tablet for life, and he needed dental surgery to have three teeth removed.

Following his health check he was placed into Rita’s care for the start of his recovery.

This level of care is costly, which could be a reason behind his abandonment, Rita suggested: “Caring for a pet isn’t cheap, especially when vet bills mount up. People are struggling with rising living costs and I can see how Thomas’ untreated injury got worse and he needed pricey dental work and perhaps his owner just couldn't afford the vet bills, which is really sad.

“Honestly, though, I don't think Thomas had seen a vet for some time. Otherwise, he wouldn’t have gone so long with a badly broken tooth and needed such expensive treatment.

“We’ll probably never know what caused the injury or why such a loving cat was abandoned, regardless of the circumstances, but the main thing is that Thomas is safe now. He is such a lovely friendly boy who just wants to be with you all the time.” 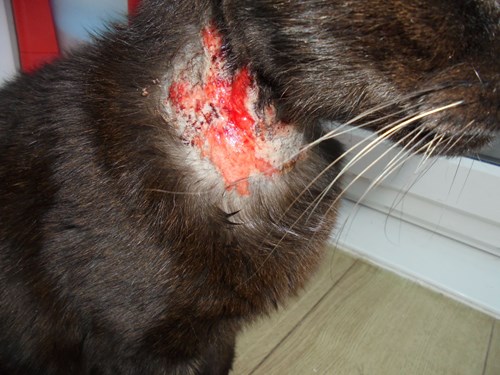 The volunteer-run branch has had to foot a growing vet bill that has already topped £1,000 and, after seven weeks in care, is still rising. Thomas’ recent dental bill alone was £500.

Rita and other volunteers raised a few hundred pounds at local fairs and fetes but fundraising has been hit hard so they are appealing for help to fund Thomas’ recovery.

Donations towards Thomas’ care can be made via the branch’s JustGiving page. Any funds raised beyond those needed for Thomas will be used for other cats in their care.

Sarah Elliott, Cats Protection’s Central Veterinary Officer, issued a warning against poor use of collars: “We have seen too many injuries caused by collars, where cats have been caught while playing, hunting or trying to escape from danger.

“A cat can become caught in an elasticated or ill-fitting collar and this can result in serious injury. In their desperation to get clear, they can get their legs stuck under the collar or the collar can get tighter and bite into their body or neck causing open sores. Not only is this extremely painful and distressing for the cat, but it can also result in permanent injury.”

Cats Protection believes that all owned cats should be identifiable to allow vets to trace their owner should they become lost or injured. The preferred method of identification is an implanted microchip as this is permanent and safe.

If an owner chooses to fit a collar with their contact details, more information about choosing a suitable cat collar and fitting it safely can be found in our cat collars guide.

“When Thomas gets a home, we’ll make clear that he shouldn’t ever wear a collar and his flea and worm treatments should be kept up to date, just as a precaution,” added Rita.” We don’t want to see him in this poor state again.”

Sadly, Thomas could not be reunited with his previous owners as, despite being microchipped, he was not registered to any name or address. Now given the all-clear, the branch hope to find a new home for Thomas soon.

“Thomas is a very affectionate cat who would love to find his forever home,” said Rita. “We put him up for adoption after being signed-off by our vets, but sadly we haven’t received any interest so far. There must be someone out there who can give Thomas a loving home.”

Thomas would be an ideal companion for an older couple where he can be the only cat and receive the attention and fuss that he craves. To enquire about Thomas (adoption fee is £80) please call the branch on 01842 815 550.