Millie’s family had given up hope of ever seeing the missing moggy again and so tears were inevitable when they found out, six years later, that their much-loved family cat had been found safe and well not far from her former Hampshire home. 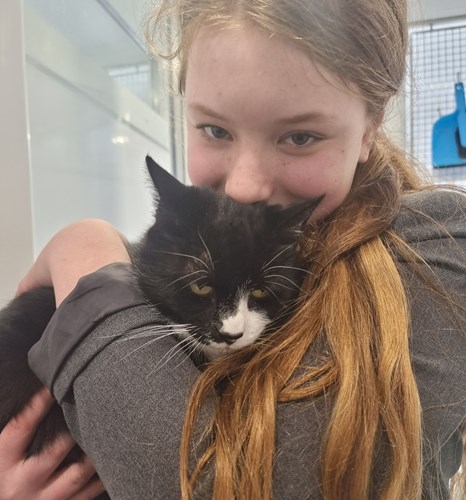 Carers scanned 11-year-old Millie for a microchip after she was reported as abandoned and arrived at our Haslemere Adoption Centre in Surrey.

Their initial relief at finding a microchip with contact details took a dip when they realised that the address in Gosport was out of date and Millie’s owners no longer lived there – in fact, they had moved twice since then.

All that could be done now was to send a letter to the listed address and hope the new occupant had forwarding details.

“Amazingly, the letter found its way to Millie’s owners and we were contacted a month later,” said Anna Green, Haslemere Adoption Centre Deputy Manager. “We had to keep her in care all that time, just in case, but it meant that eventually we were able to set up a successful reunion.”

Millie’s owner Kelli Young drove 25 minutes from her home in Clanfield, Hampshire, to collect Millie from the Haslemere Adoption Centre. Her children Maisy, Lee and Jamie were overwhelmed to have their family cat back after so long.

“We are so happy as a family to have Millie back home after six years,” said Kelli. “Millie and my son were really close and, even though he is 20 now, he cried when he saw Millie for the first time. She knew who he was straight away. I want to say a massive thanks to you all for what you have done for Millie. From the bottom of all our hearts, thank you”. 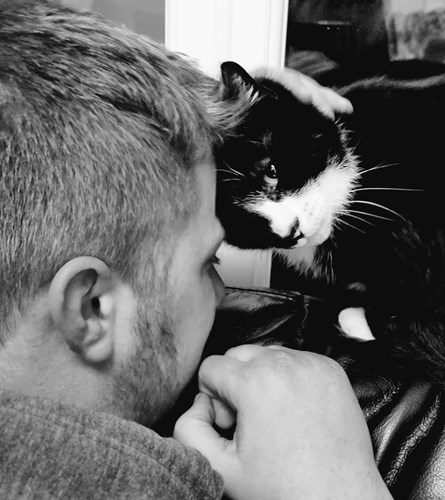 Millie back with her best friend Lee

Anna added: “As a charity that reunites thousands of cats with their owners every year across the UK, we were delighted that we were able to help reunite Millie with her owner. Their story shows the benefits of microchipping.

“It wouldn’t have been such a happy ending if the letter hadn’t been passed on by the new homeowners. This really highlights the importance of keeping your contact details up to date, no matter how long your cat has been missing.”

Microchips contain a unique identification number and are inserted under the cat’s skin between his shoulder blades. The number is linked to a database containing details of the pet, as well as the owner’s contact details. When a scanner detects the microchip, a simple phone call can ascertain the owner’s details and the pet can then be quickly returned home.

A microchip ensures cats can be reunited with their owner should they go missing and that lost cats are not mistaken as strays and taken in by rehoming charities. It also means owners can be notified if their cat has been injured or killed in a road accident. Cats Protection encourages local councils to collect, scan and notify owners in such cases.

However, it is very important pet owners keep their details up to date so owners should check their certificate, which will tell them how to do this.

“It is vital that details are kept up to date on microchips, so owners can be contacted if their cat goes missing,” said Madison Rogers, Cats Protection’s Acting Head of Advocacy & Government Relations. “Moving house is a busy time but it is really important owners update their details, ensuring that phone numbers and emails are still valid.”

Find out more about microchipping.