Bandit the kitten dragged himself into a nearby garden with horrific wounds, crying in pain for help. Thankfully, our Swale Branch came to the rescue 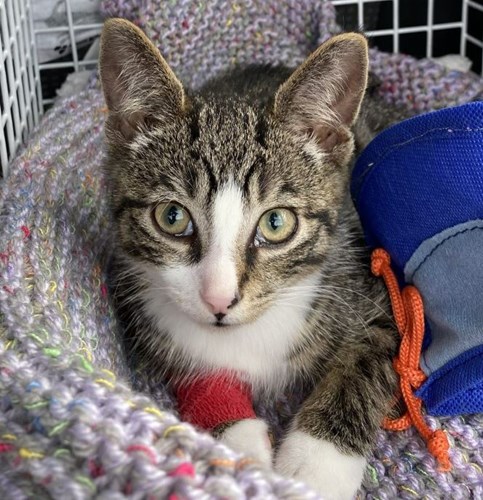 CCTV footage showed the kitten, who has been named Bandit by his rescuers, dragging himself into the garden, crying in what must have been dreadful pain with such awful injuries.

What the couple saw was shocking; the tiny kitten was in a pitiful state, unable to walk with a severely infected rear end and what appeared to be a broken leg and damaged tail. They immediately called our Swale Branch and the volunteers rushed to the scene. 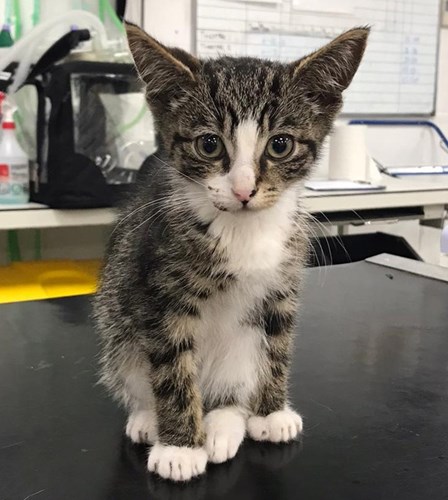 While it is unknown how this kitten came to be in the area, it is clear that the quick response of his finders and the cat carers who responded to the call probably saved his young life.

Cat welfare volunteer Danielle Hoynes was first on the scene. She scooped up the kitten and ferried him to Newnham Court Veterinary Hospital. The vet team removed the maggots from his wounds, which were thoroughly washed and treated. They made the kitten, believed to have been around 10 weeks old at the time, as comfortable as possible. 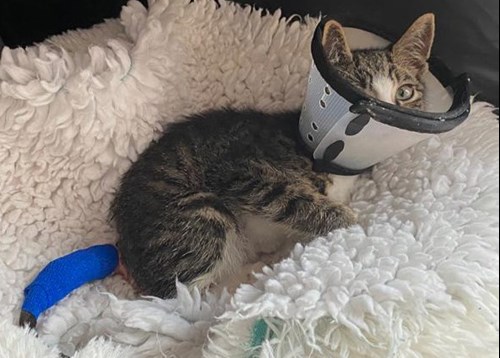 Kim Braysher, the Swale Branch’s welfare team leader, said: “His strength and personality are incredible. He’s so loving and trusting despite what he’s been through. He is the most delicious kitten we’ve ever met.

“We all love Bandit, he’s such a spirited boy. He’s just the cutest, bravest little kitten. He’s been the perfect patient, although he doesn’t like wearing his head cone.”

Since Bandit was discharged from emergency treatment, vets at Fern Cottage have continued with his care. His tail has been amputated, his rear leg has been fixed and, although he had an infection after the operation, his wounds are healing and the vets have been impressed by his recovery. 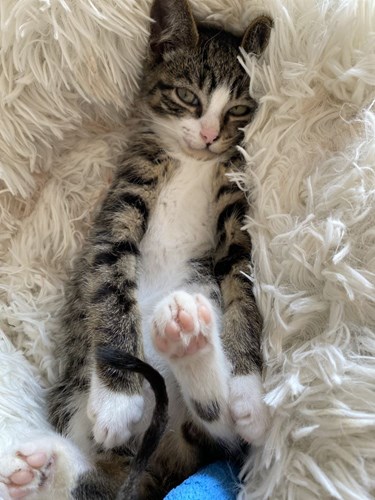 Treatment has been expensive and is not over yet, so Swale Branch have launched an appeal for Bandit to recoup some of the £3,000 costs and help them to care for more cats. Donations can be made via their JustGiving page.

Kim said: “Bandit has a long road to travel and he is not yet ready to be homed, but we are hopeful that with good veterinary care he will be set up to lead a full and happy life. Everyone who meets him falls under his spell.”

To find cats and kittens looking for new homes in your area, visit www.cats.org.uk/adopt-a-cat

Kitten rescued from bus depot and given apt new name