Our Bridgend Adoption Centre is celebrating its 25th anniversary and remembering some of the thousands of cats the volunteers and employees have helped over the years.

Cats Protection’s Bridgend Adoption Centre first opened its doors 25 years ago and has rehomed more than 33,000 cats and kittens in that time.

Staff and volunteers at the centre have also helped thousands more cats through their neutering and education work.

“It’s amazing to think we’ve helped that many cats over the years – you just get on with the job each day, doing the best you can for the cats in your care” said Deputy Manager Molly Hughes. 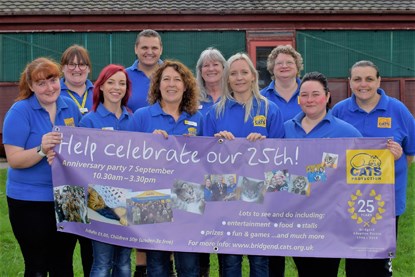 The Bridgend team are hosting an anniversary party on 7 September

“Before you know it, it’s a quarter of a century later and you realise you’ve helped more than 30,000 cats move to great new forever homes!”

Molly has worked at the centre ever since it opened, starting out as a cat carer and now working as deputy manager.

She said: “The way we work has changed a lot since 1994 – when we first opened there were no computers, no reception, just a phone and a notebook!

“We now have 24 members of staff and more than 70 volunteers helping us care for the cats, raise money, run reception and maintain the building.”

Everyone at the centre agrees that the best thing about their work is making a difference for cats and changing their lives for the better.

These include seven kittens found dumped in a zipped-up handbag and left for dead outside the centre in 2011.

When the abandoned kittens were spotted by a passer-by, they were only semi-conscious, suffering from a lack of oxygen and heat exhaustion. Luckily the kittens recovered from their ordeal and were soon found loving new homes.

In 2013 six tiny kittens were found inside Parc Prison, Bridgend. Named Jessica, Sherlock, Christie, Marple, Kojak and Morse, the kittens – and their mum Agatha – got an early release when Cats Protection found them great new owners.

The following year, stray cat Donatella won hearts and gave staff and volunteers a Christmas surprise when she gave birth to a huge litter of 11 kittens. 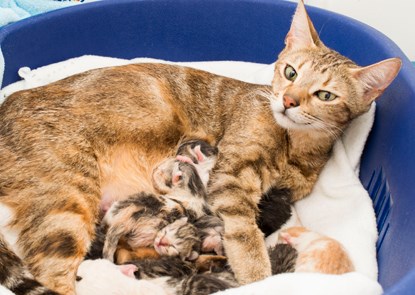 Donatella with her litter of 11 kittens

Sue Dobbs, centre manager, has been at the centre for 21 years and says it’s like being part of a big family. She said: “It’s extremely varied and no two days are the same – it’s definitely never boring!

“We’re lucky to have a lot of support from the public. Lots of us have family and friends who say that – wherever they go in the world – they always meet someone who knows someone else who has adopted a cat from us. Unbelievable!”

Staff and volunteers often find themselves trying to help people as well as cats.

“It can be frustrating if you’re trying to help someone but they don’t necessarily want to be helped,” said Sue.

"For example, some time ago we took in some cats from a lady in Cardiff because she had too many and it was all too much for her. But unbeknown to us, she’d hidden a cat upstairs in the house and the situation soon escalated again.” 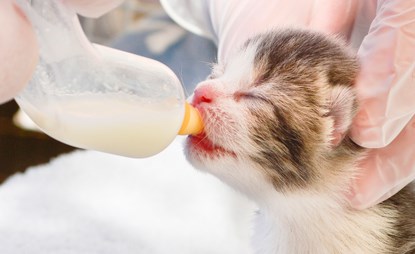 Despite incidents like these, most of the time the work is extremely rewarding and support for the centre is constantly growing – in recent years, this is largely thanks to the rise of digital media.

More than 19,000 people follow Bridgend Adoption Centre on Facebook, giving the team the chance to educate people across the UK and around the world about good cat welfare.

Sue said: “We have followers from more than 50 countries and people from outside the UK regularly donate to our fundraising appeals.

“Social media allows us to tell the story of what we do and helps a lot with fundraising. It’s our window to the world and a huge audience we didn’t have before.

To find out more about the work of Bridgend Adoption Centre, visit www.cats.org.uk/bridgend