Henry has found a new owner who can help him stick to his diet and provide outdoor space to continue his exercise regime.

Weighing in at a mighty 8kg, four-year-old Henry was at least 2kg overweight when he came into our Downham Market Adoption Centre more than six weeks ago.

Henry had been living in a rural home when he was relinquished to our Norwich Branch and was then transferred to the centre for pre-homing care. 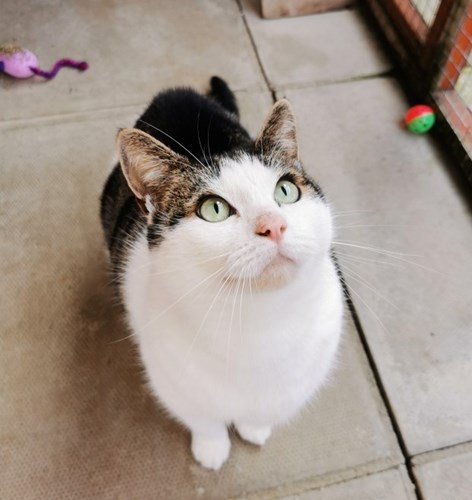 Thanks to a controlled diet and exercise programme in line with veterinary advice, this podgy puss soon started to drop the extra weight.

When he is in a new home where he is able to roam as much as he likes, Henry’s care team believe his weight should normalise.

An ideal weight for a healthy adult cat should be around 4.5-6kg, dependent on age and breed. If a cat is believed to be overweight, veterinary advice should be sought before making any changes and crash dieting should always be avoided. A gradual, steady decrease in weight is best and it may take up to a year for a badly overweight cat to reach their ideal body condition.

“Henry is a handsome, free-spirited boy with bags of character and, once he can enjoy the more active lifestyle that he loves, he will slim down and feel much better in himself,” said Cat Care Assistant Leah Snowden. 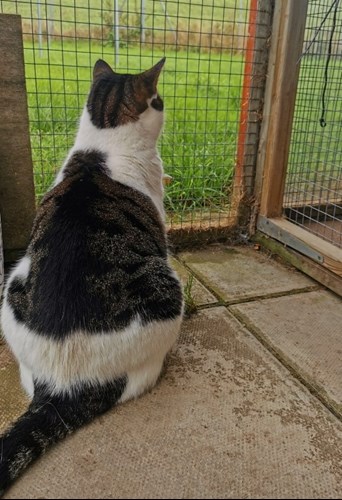 “Fat cats can also become lethargic and need encouragement to exercise. Thankfully, that’s one thing we don’t need to worry about with Henry. He’s a lively boy who likes to run around so we’ve been able to develop an effective exercise programme to suit this character.

“Overweight cats find it hard to clean themselves and are at a higher risk of health issues, such as diabetes, arthritis and heart trouble, so it’s important that we get Henry’s weight under control while we can still avoid later problems.”

Henry needed to find an adult-only home with an experienced cat owner. He would be suited to a rural location where he has the freedom to explore. In return, his lucky new owners would get an independent cat who will also offer loving company in the evenings.

Leah added: “Henry needs a home where he can spend a lot of time being out and about doing cat things. He enjoys his home comforts and likes to be around people, but on his own terms. He’s not afraid to make clear that closed doors can stifle his sense of freedom.

“That’s not to say he’s not affectionate and it doesn’t stop him from seeking out attention when he’s in the mood. It sounds like he wants things both ways but he knows his own mind and the limits to what he’ll allow. There’s nothing wrong with that, of course. We all appreciate our own space. In fact, it makes him all the more endearing.

“Henry's been a joy to look after but it's a shame to see him still here after all this time when all he wants is a caring home to be himself.”

Henry has now found the perfect new home after his new family saw his story in the newspaper. They will continue with his weight-loss plan and give him lots of space to roam.

To find cats looking for homes in your area, use our Find-a-cat tool to find your new feline friend.

The UK’s pet cats have been getting fatter in lockdown