A tiny, injured kitten has miraculously survived two weeks outdoors in the height of winter.

Libby the kitten used up at least one of her nine lives after she was abandoned in a country lane in Fareham in the freezing cold.

Volunteers from Cats Protection’s Fareham Branch found her cold, hungry, underweight and with an injured nose two weeks into her terrifying ordeal and were able to get her to safety. 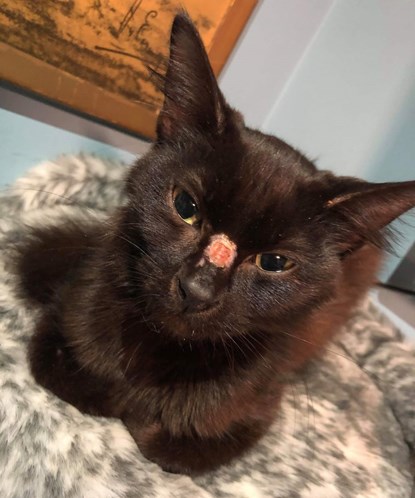 Libby the kitten survived two weeks in the cold

Libby’s four siblings had been rescued a fortnight earlier when a member of the public contacted Cats Protection to say she had spotted some kittens in a lane near Botley Park golf course.

Lorri Seymour, Coordinator of Cats Protection’s Fareham Branch, said: “It was after 8pm and in the middle of nowhere, so it was very dark and scary – there’s just fields and a narrow lane so we only just got the car down there.

“Members of the public had managed to catch two kittens and we used traps* with food inside to catch two others – it took a couple of hours but the kittens were really hungry so they were eventually tempted inside. 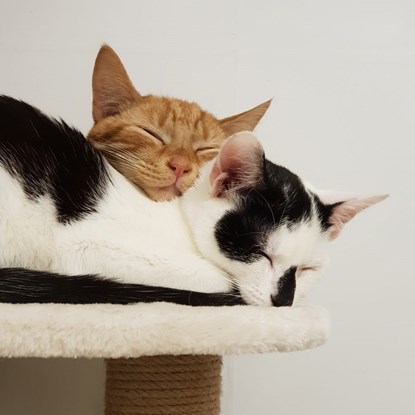 Two of Libby's siblings enjoying being safe and warm

“The lady who called us said she’d seen five kittens, but there was no sign of the fifth. We waited as long as we could, but we needed to get the other kittens checked over – it was an awful dilemma.”

By 1am Lorri and fellow Cats Protection volunteer Trudi Farrow had taken the rescued animals to safety, but remained concerned there was another kitten who needed help.

There was no sign of her for two weeks, but against all the odds the same member of the public who had originally spotted the animals called again to say she’d seen a black kitten in the lane. 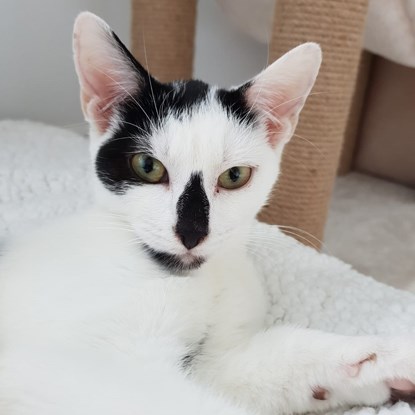 “Trudi, her husband Mark and I headed straight back to the lane and, thankfully, this time we managed to find and catch the remaining kitten,” said Lorri.

“It was a miracle Libby was still alive and it was so cold out there I don’t think she would have made it through another night. She must have been terrified.”

Lorri has been caring for the first four kittens at home – despite her partner being allergic to cats – and a volunteer fosterer is caring for Libby, feeding her a teaspoon of food every hour since she was rescued.

By the time Libby arrived, her siblings – some of whom might actually be similar-aged kittens from another litter – were recovering well, gaining weight and quickly gaining confidence. 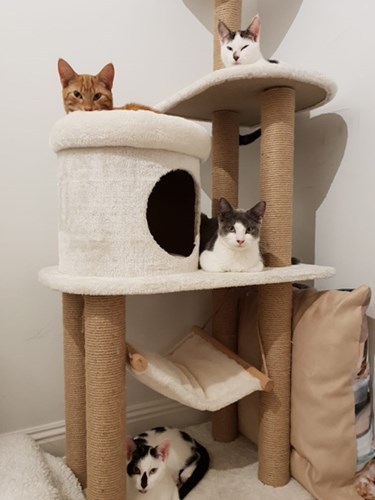 The kittens have all found their forever homes

They were all given full health checks, flea and worm treatments, and a blood test and antibiotics for some of the kittens.

The first four kittens, thought to be about 12 weeks old when they were rescued, have already been adopted and moved to their forever homes – and the branch has a list of people waiting to adopt Libby when she’s well enough.

“The number of cats being dumped is a major problem for us because it can take weeks and sometimes hundreds of pounds to nurse just one unfortunate cat back to health,” said Lorri.

“We seem to be living in a throwaway society where some people think nothing of just dumping cats.

“I urge owners to get their cats neutered as they are such prolific breeders. Just one unneutered cat can produce up to 18 offspring in a year so neutering will help to prevent more unwanted kittens like these in the future.”

For more information about the importance of neutering, visit https://www.cats.org.uk/what-we-do/neutering

*Cats Protection’s Fareham Branch was able to buy new traps which were used in this rescue and other vital equipment thanks to a grant from Support Adoption for Pets.