Cats Protection’s Southampton Branch is appealing for help after taking in a cat who was viciously shot three times with an air gun while heavily pregnant.

They launched a JustGiving appeal, which is now very close to reaching their target of £5,000 to cover the veterinary care needed to save young Hope who was left unable to walk because of her injuries. 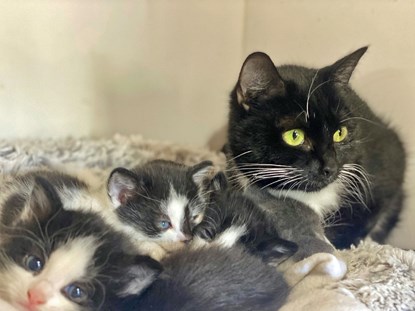 The poor black-and-white cat was found covered in blood, sheltering in a garden in Marchwood in Hampshire.

Just days after receiving surgery to remove one of the air gun pellets, Hope gave birth to three black-and-white kittens and one grey-and-white kitten; Raza (meaning hope), Asha (also meaning hope), Sachi (meaning miracle) and Nova (meaning new life). However, the outcome could have been very different. Now Hope, believed to be around three years old, is on the road to recovery. 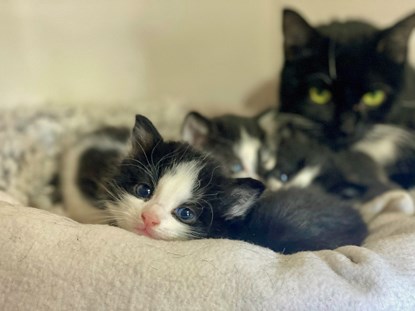 Hope had been shot three times with an air gun which had left all three pellets still in her body. Two were potentially fatal owing to their proximity to her spine and brain.

Of the two pellets that stopped in her neck, one had entered on her under side and then travelled all the way through her body, and neither could be removed without risking Hope’s life. The third was lodged in the roof of her mouth and was removed. 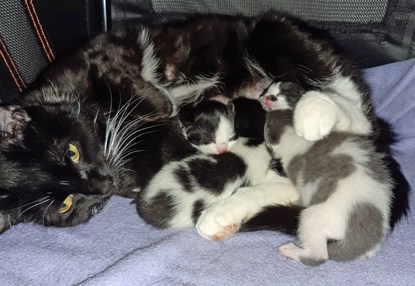 Branch Coordinator Carolyne Kemp explains: “When Hope was taken as an emergency case into the surgery, the team couldn’t examine or x-ray her without pain relief. As well as needing surgery for her wounds and to remove the pellet, she needed to stay as an in-patient for a few days until she was able to come home with me to foster.

“Hope needed further assistance when it was time for her kittens to be born, so she has spent a lot of time needing veterinary help. To get through such an ordeal and then give birth to four healthy kittens is really quite amazing. 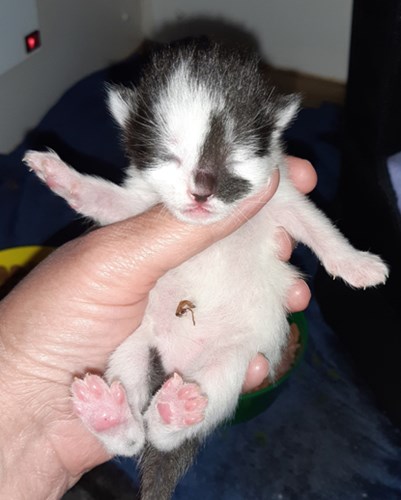 “We are extremely grateful to the wonderful team at Seadown Veterinary Surgery in Hythe who took such excellent care of Hope after she had suffered through such a cruel and violent attack.

“As a volunteer-run branch we fundraise to cover all expenses ourselves and the charity as a whole receives no government funding so we are asking anyone who has anything spare to please help us out.

“We are so glad we could save Hope and her kittens from what would have been a horrible and painful death if she had not been found. If we are lucky enough to raise more than the total needed to cover Hope and the kittens’ vet care, it will be used to help other local cats through our branch.” 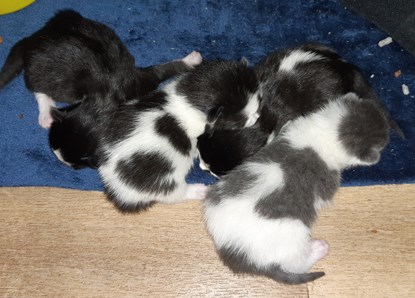 If you would like to donate to help cover the cost of Hope and her kittens’ care please visit the branch’s JustGiving page.

All four cats will be available for homing from the branch once the kittens are past eight weeks old and the current pause on adoptions owing to COVID-19 has ended. Anyone wishing to offer them a home once restrictions are lifted should keep an eye on the Southampton Branch’s website https://www.cats.org.uk/southampton where cats’ details are posted as soon as they are ready to be homed. 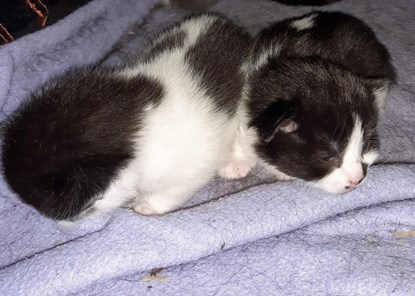 As a charity Cats Protection is calling on the government to introduce the licensing of air guns in England and Wales, in line with legislation in Northern Ireland and Scotland, to prevent cats like Hope being fatally shot or injured. Cats Protection’s online petition on the issue has received over 115,000 signatures to-date. To sign the petition, visit https://cats.e-activist.com/page/7153/petition/1