With patience and understanding from his new owners, nervous Elvis has made his new home his own

When seven-year-old black cat Elvis arrived at our Tyneside Adoption Centre in January 2020, he was incredibly timid and nervous. 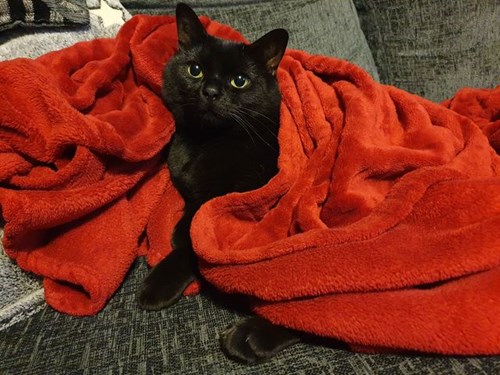 His previous owner had made the difficult decision to give Elvis up to Cats Protection after he had become frustrated with not having any outdoor access available, often showing signs of aggression and inappropriate urination as a result.

“He was very nervous at first and over the next few weeks the team worked hard to help him start to settle and gain his trust,” said Emzi Frater, Tyneside Adoption Centre Manager.

The team gave him all the treatment he needed, including vaccinations, neutering and microchipping, and then it was time to try and find him a new home with owners who were prepared to take on a shy moggy. Luckily, it wasn’t long before John and Melissa came along. 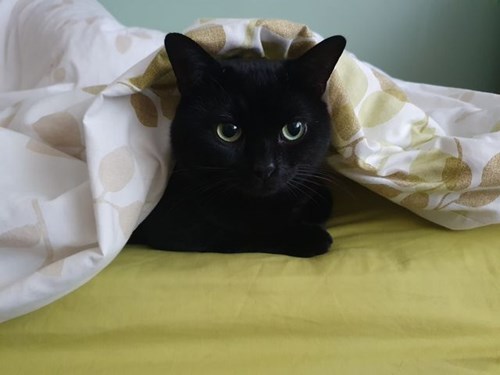 “Elvis continued to be a timid boy so when it was time to look at finding a match and John and Melissa expressed an interest in him, we made sure that they were fully aware that he would take some time to come around and needed a great deal of patience and understanding,” said Emzi.

“He likely would never be a big cuddler or a lap cat and they understood and accepted that it would not be easy. Both the Tyneside team and his new family were off to a great start knowing it was a good match but would take a lot of patience and trust, to give this lad a second chance.”

The Tyneside team were hopeful that Elvis would grow in confidence in his new home, and a year later in March 2021, were thrilled to receive a very promising update from John and Melissa. 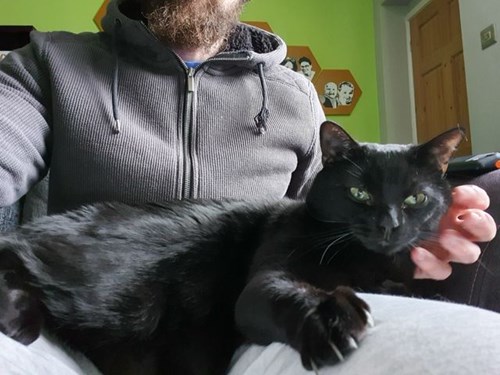 Melissa wrote: “I just thought I'd give you a little update on Elvis, who has been with us for a full year today. We initially came down and met him and fell in love with him on our first visit, and he was living with us about a week later.

“Settling him into the house wasn't the easiest. He took to hiding at the back of a wardrobe in his sanctuary room and giving us a massive fright.

“After a couple of weeks he would very timidly begin to approach us when we came into his room to feed him or change his litter tray and we were able to begin offering him a hand to sniff and begin some very gentle touching and stroking.

“He spent four weeks in his sanctuary room before he was introduced to the rest of the house and he very quickly made it his own. 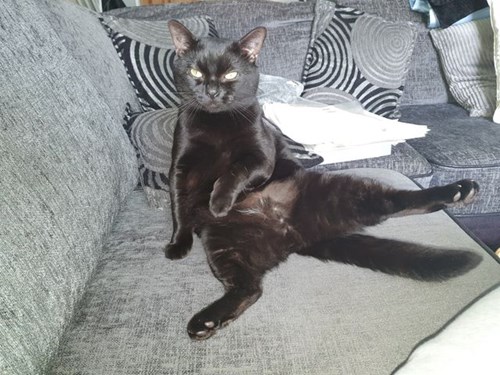 “He's still a very nervous, timid boy, and not the most affectionate. He comes to you and lets you know when it's time to give him a little bit of attention, and he doesn't seem to like sitting on your lap, but does like sitting next to you now and again to get some rubs.

“He's been an indoor cat the whole time we've had him, but we have slowly been introducing him to a walled in, secure back yard, and let him sit at the front door. He'll run back inside terrified if he hears the sounds of birds or traffic, or even other people.

“He does seem like a very happy and content cat though, despite his nerves. He's got lots of comfy places that he likes to snooze and he loves playing on the open staircase. 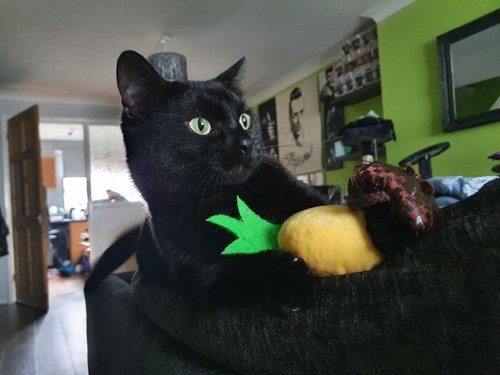 “His favourite toys are some soft stuffed toys we bought him. He has a pineapple, a banana and a flamingo and he loves fighting them all.

“We can't thank you all enough for the help and support you gave us through his problems settling in, from the team at the centre to the Behaviour team who maintained contact with with me and helped us to settle him in.”

At Cats Protection we make sure we find the purrfect match for every cat in our care, no matter how long it takes. We also provide new owners with all the help and support they need to settle their new feline friend into their home.

To find your purrfect match, visit www.cats.org.uk/adopt-a-cat and start searching for cats looking for new homes in your area.

For advice on how to help a shy cat like Elvis, visit https://www.cats.org.uk/help-and-advice/cat-behaviour/shy-cats