Why do we love cat videos so much?

Towards the end of 2015, a story hit the national headlines that perfectly illustrated the popularity – and potential profitability – of internet videos featuring domestic cats.

After discovering his cat, Sox, standing on the edge of the bath reacting to her reflection in the mirror, Scottish student Fraser Napier recorded the adorable performance on his phone and posted the video on YouTube. He no doubt expected a few amused comments from friends and subscribers to his channel. What he ended up with were hundreds of thousands of views and companies queuing up to offer him money to promote their wares on the video.

Sox's minute-long performance has now been viewed over 3.5 million times and Fraser has earned a pretty penny from the advertising. But what made that video of Sox, well, being Sox, go viral?

It’s long been known that watching animals – especially pets – entertains us humans. From the days of TV programmes such as Animals do the Funniest Things to the modern phenomenon of internet videos, millions have been attracted to the antics of our furry and feathered friends.

However the fact that cats have been by far the most popular category on YouTube since its launch suggests that they have something extra-special. Since the very first upload in 2005 – a clip of YouTube co-founder Steve Chen’s cat, Pyjamas, playing with a rope – feline-featuring digital diversions have been watched on the video-sharing website over 26 billion times.

From 8-bit cartoon sensation Nyan Cat to real-life celebrities such as Cole and Marmalade, Maru and Grumpy Cat, it seems we can’t get enough of moggy-inspired movies. But why cats in particular? Here are some theories:

Cats don't care about your camera

Domestic cats evolved from the African wildcat, which is a solitary hunter. They therefore didn't develop facial features to communicate with their own species or humans, and that inscrutability makes for compelling viewing. A cat is unlikely to acknowledge the person holding the camera and perhaps doesn't realise that you’re filming them which means that everything they do is delivered in an unaffected manner. Sox's discovery of another bathroom cat, for example, is a serious business.

Cats are our buddies

One of the reasons animal videos are so popular is because humans are anthropomorphic and we project our own emotions onto the furry stars of videos. Every time we smile at, say, a clip of a cat knocking a glass of water over and then walking off as if nothing has happened, the reason we're amused is because we're attributing human motivations to the video's star. Er, Fili, you know that was the last toilet roll, right?

Attributing human emotions onto animals like this may make us laugh – but it contributes to a lack of understanding about what animals really feel and why they behave the way they do. Pssst – if you want to know more about why your cat acts a certain way, check out our free moggy modules.

When we're watching dogs, we know that they can be trained to do amusing things, which casts doubt on the spontaneity of their actions. Cats, on the other hand, appear to be more independent and off-the-cuff. Take this excited kitten, Pickle – the only thing on her mind is showing her springy flower toy she's not to be messed with!

Let's face it, there's something downright amusing about watching kittens, cats, and other pets getting used to their human-built surroundings and adapting the uses of household items to meet their own needs. Whether they're playing in cardboard boxes or snoozing on a warm freshly cleaned pile of laundry, their antics tickle us. Apparently no one told Jiji he’ll get square eyes if he sits too close to the screen!

It's for medicinal reasons!

A recent study by the Indiana University Media School has discovered that watching videos of cats boosts our energy and positive emotions while decreasing our negative feelings. Far from being a guilty pleasure, then, maybe watching moggies on the small screen is becoming an important antidote to the trials and tribulations of modern life. I challenge you not to purr along to this classic cat-kitten-box combo.

Whatever the reasons behind its attraction, the cat video craze doesn't appear to be going away. In fact, the rise of internet cat video festivals and the recent stories about cinema chains considering transferring user-generated clips to the big screen suggest this may just be the beginning!

Right, I must get back to work. Well, maybe ONE more video... (Sweet dreams, Chad!) 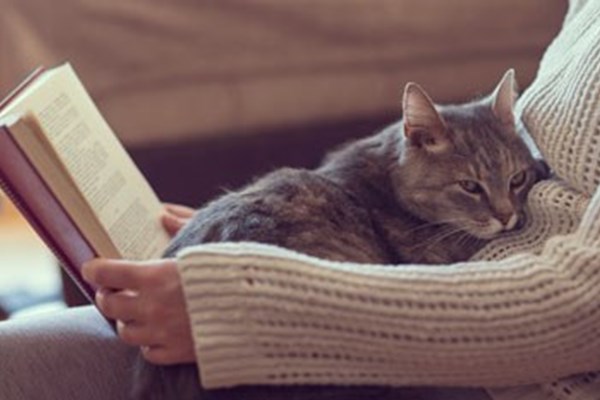