Little Fingle is currently in the care of Cats Protection’s Taunton & Wellington Branch and has 20 distinct digits in total. Cats usually have four digits and a dew claw on their front paws and four digits on each back paw, but Fingle has five pronounced digits, including one that looks just like a proper thumb, plus his dew claws on his front paws, and a further five digits on each back paw. 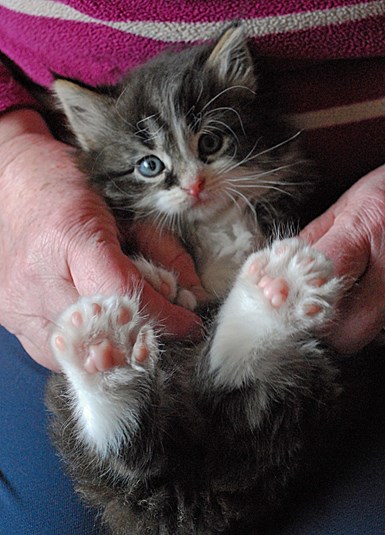 While Fingle’s remarkable paws are an endearing surprise to most, he is the latest from a family of polydactyls to have been homed in recent months by the charity’s volunteer-run branch. It seems Fingle has inherited his ‘pawsome’ trait from his father, Tiger, who not only shares Fingle’s broad face and grey-tabby colouring but was also a polydactyl, as was Fingle’s ‘uncle’, Bowie. Both have now settled into new homes.

Fingle’s mother, Mia, had arrived at the Branch while heavily pregnant. She and Fingle’s other relatives had arrived in care when their owner became unable to cope and reached out for help. When Fingle and his three siblings were born they were named after places on Dartmoor by the Branch’s joint-coordinators David and Ann Manners.

Ann explains: “Fingle was the first born of the litter, on 4 February. On 5 February he was joined by two brothers, Furze and Puggle, and then on 6 February we were very surprised when their sister Ingra arrived! We'd heard of delayed births before, but hadn't actually experienced it.

“Fingle is the only polydactyl in the litter. He is bigger than his siblings, and has been first to achieve most things, although walking was more by luck than judgement as he got his paws in the wrong order!

“Due to his extra toes, Fingle is very good at climbing up their tall scratching post - and back down again.  We just need to be careful about his bedding, as he gets his claws well and truly stuck in towels, so needs to have a soft fleece blanket.

“The kittens all spend time stalking one another, followed by an airborne ambush and kitten play. They're like lambs, jumping in the air and racing around for no apparent reason.  And then they crash into deepest sleep. They have a remarkable ability to sleep through any disturbance.

“David and I have been volunteering for Cats Protection for 35 years.  Murphy was the first polydactyl we saw in the ‘90s who had 26 toes and since then we’ve only seen a couple.”

Ann adds: “Fingle and his siblings are truly gorgeous but he and his family all arrived in care because none of his relatives were neutered. There was in-breeding between the cats because like so many people, his previous owners didn’t realise that not only can female cats become pregnant as young as four months old, but that unneutered family members will mate. The numbers simply got out of control. We’d invite anyone who is struggling to afford to get their cat neutered to reach out to us as in many occasions we can help.”

A recent survey* by the charity, found that 77% of respondents were unaware cats could get pregnant from as young as four months old, while 86% did not know a female cat could produce up to 18 kittens in just one year.

Cats Protection runs a means-tested neutering scheme. To find out more visit https://www.cats.org.uk/what-we-do/neutering or call the neutering helpline 03000 12 12 12 between 9.30am and 1pm on weekdays.

Fingle, his siblings and mother have all been reserved and will go to their new loving homes once they are neutered. To find out about the other cats and kittens at Cats Protection’s Taunton & Wellington Branch, please visit https://www.cats.org.uk/taunton or call 03452 602 397.

Photo of Fingle by David Manners.