Penzance street cat with early cancer of the ears has them surgically removed.

Cats Protection’s Cornwall Adoption Centre is appealing for help for a cat who had to have both ears partially removed after he was found on the streets near Penzance. 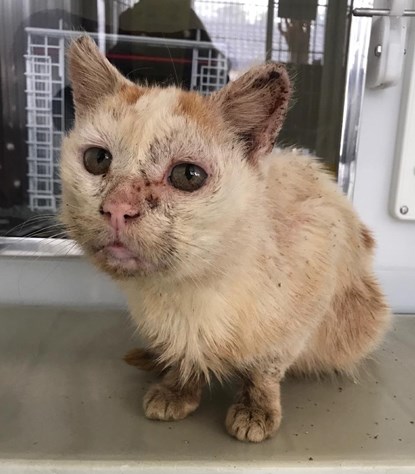 Alfred when he arrived at the Cornwall Adoption Centre

Eight-year-old Alfred arrived at the centre after he was discovered wandering forlornly around Sancreed. It is likely he has been a long-term stray and was visibly underweight and wary of people when he arrived.

After his first vet check, Alfred was diagnosed with a severe skin allergy which was causing lesions and inflammation across his body. He was also found to have signs of early cancer on his ears caused by constant sun exposure during his time living rough.

The final cost of his veterinary care and finding him a new home is likely to reach at least £600 and the centre has set up an appeal to help cover the costs, with any funds left over from Alfred’s care going towards other cats at the centre. 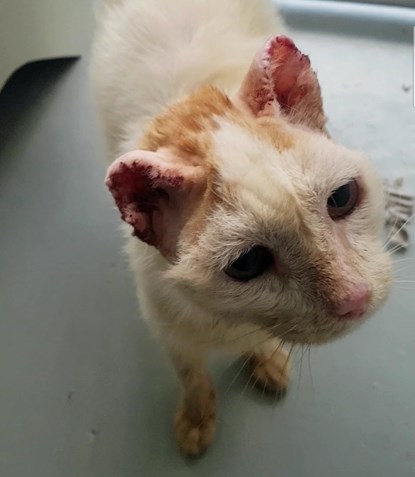 Gareth Williams, Deputy Manager of the centre said: “When Alfred arrived here at the centre he was in a terrible state. His skin must have been almost unbearable. He was covered in scabs and fleas, furiously itching to try and get some relief. As a result of the itching, his skin had become infected and to make matters worse, he had severe sun damage.

“Understandably, he didn’t want anything to do with us when he first arrived. He, was growling, hissing and lashing out in pain, so we took him to his new cabin with some food and warm blankets and left him to it.

“By the next morning he was eager to come out and introduce himself to everyone, chatting and rubbing against us. It’s amazing what a good night’s sleep in a warm, safe place will do. Once he realised we could be trusted, we were able to examine him properly and started him on steroids and antibiotics, getting him on the road to recovery.” 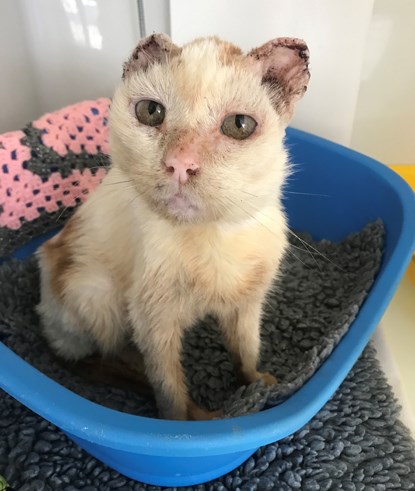 Alfred recovering from his ear surgery

Once Alfred’s condition was more stable, the centre scheduled his surgery for a partial pinnectomy, which sees the damaged area of the ear flaps removed. The skin on cats’ ears is very thin with hardly any protective fur. Pale coloured cats like Alfred are especially prone to skin cancer as there is very little protective pigment in their ears.

Gareth adds: “Alfred’s doing really well since his operation. His ears are healing nicely and it won’t have any significant effect on him longer-term. He is such a friendly cat and will make a lovely companion once he’s ready for a new home.

“Alfred’s story does show the damage that excess sun exposure can cause to cats and although we’re coming into the winter months now, the sun has still been very warm in recent weeks and cats can be vulnerable to the elements all year round.

“Unfortunately strays like Alfred don’t always have the luxury of shelter and protection, but for owned cats the best way to keep them protected on hot, sunny days is to keep them indoors during the hottest times, which are traditionally between 10am and 3pm. If that’s not possible, providing sources of shade in your garden using cat-friendly plants and allowing access to a shed or outhouse will help protect cats’ skin. Vets will also be able to advise about a feline-friendly sunblock.

“For the winter months we should be aware of potential frostbite to ears, nose, tail and toes, any area where the skin is thinner, and be vigilant for signs of skin discolouration, pain, swelling or blisters. It’s also sensible to check your cat’s paws when they come in and gently wipe off any road grit, salt or compacted snow.”

In addition to the ear surgery and treatment for his skin condition, like all Cats Protection cats Alfred will be neutered, up-to-date with his flea and worm treatments, microchipped and vaccinated before he is made available for adoption.

Further details about Alfred, including the type of home that would suit him best, will be posted on www.cats.org.uk/cornwall once he’s ready for adoption.

For more advice on keeping your cat safe outside, visit https://www.cats.org.uk/help-and-advice/home-and-environment/keeping-cats-safe-outside 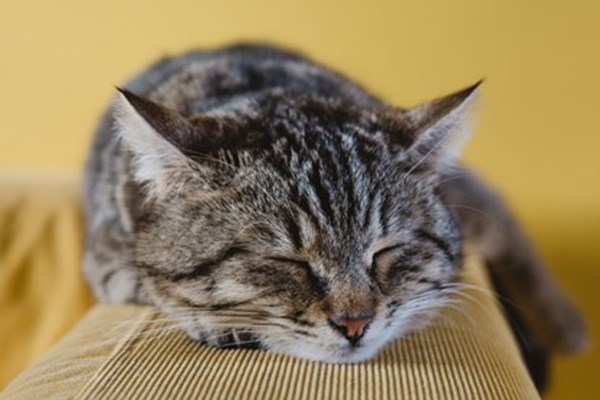 Top tips to reduce your cat’s risk of getting cancer