The mature moggy was so thin that a member of the centre team could fit their thumb and first finger in a circle around her abdomen. She weighed just 2.3kg, almost half the weight of most cats her size. 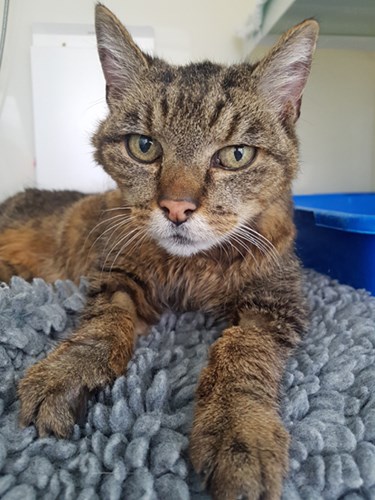 Summer getting settled into her pen at Cornwall Adoption Centre

Summer, who would be 80 in human years, was incredibly dehydrated and could barely stand, only able to manage a couple of steps before collapsing. She also had dreadful breath despite having relatively good teeth, as well as very matted fur and obvious arthritis.

It was soon discovered that Summer was microchipped, and originally named Mary, but sadly her owner’s details had not been updated and despite trying each detail on the chip, as well as every vet in the area where Summer’s original owner had been, there was no trace. 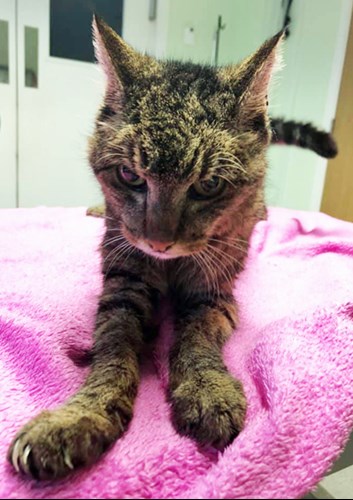 Summer when she first arrived at the centre underweight and dehydrated

An initial vet appointment gave Summer a poor prognosis but she was given fluids and ordered rest, plenty of tasty food and a warm bed to help her recuperate back at the centre.

Once Summer’s condition had improved and she was able to tolerate some tests it was discovered that she had hyperthyroidism which caused her body to burn energy from food as quickly as she could eat. Surgery was booked for a thyroidectomy as well as a toe removal resulting from an old injury which caused too much damage to save it. 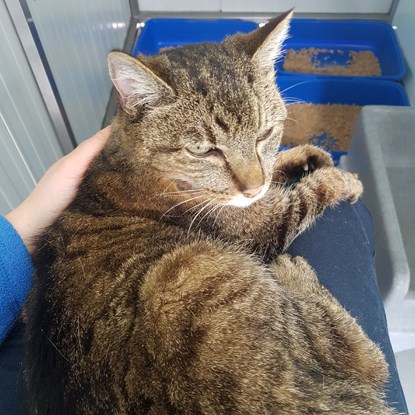 Summer getting some fuss from Cat Care Assistant Kirsty

Cat Care Assistant Kirsty Balcombe said: “Everyone at the centre fell head over heels in love with Summer. She was a feisty old girl and despite being in really bad shape initially, she showed us from the start that she was a fighter and full of spirit. She had an amazing gravelly purr that sounded like a mix between an aeroplane and an old car engine.

“She also had the unnerving habit of sleeping with her eyes open. So most of us feared we might have lost her when we first saw her sleeping, only to jump in surprise when Summer would raise her head and greet us with her very distinctive miaow and purr. 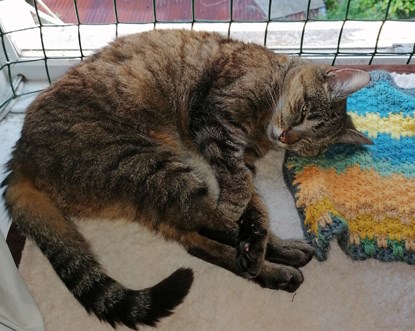 Summer snoozing on her favourite windowsill at home

“Queen Summer, as she became known, could certainly be a cantankerous old lady and we all loved her for it. We could hear that she had woken up or wanted her dinner from wherever we were in the centre because she would wail in disapproval that her rest had been disrupted or her food had not arrived when she wanted. On the odd occasion she didn’t have the energy to chat or complain she would flop down beside you and lick you. She was such a lovely girl.”

Over the following weeks Summer reached 3.4kg, and once her thyroid was removed she was left with just a low grade heart murmur and arthritis, both common conditions for an older cat and easily managed. 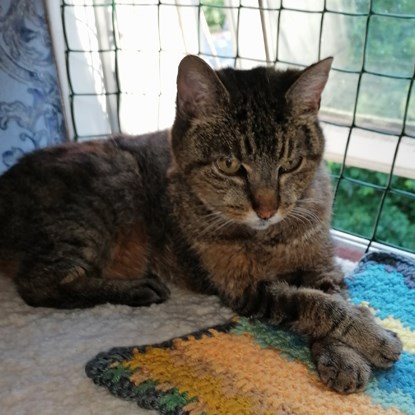 Elegant Summer with her paws crossed

Nikki Wakefield from St Austell became one of the first people to get in touch with the centre once they were able to start homing again using a new contactless approach to adoption informed by government guidelines.

Nikki says: “I called the centre specifically looking for a golden oldie and of course Summer was the perfect cat for me. She has settled in brilliantly and has already stolen my dog Merlin’s bed as well as mine and seems to think both are her own. But her favourite spot is the windowsill especially in the sun, which is why I chose to call her Summer. 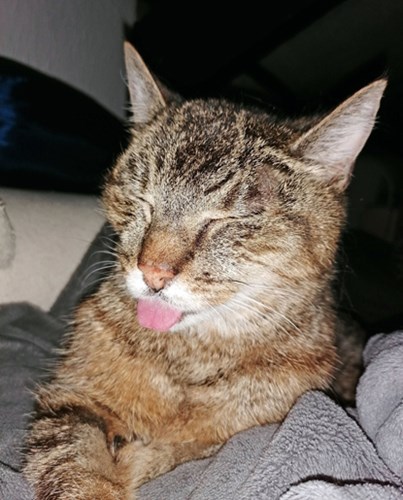 Cheeky Summer sticking out her tongue

“It’s as though she has always been part of the family. I’ve loved getting to know her funny quirks, especially her love for cat milk, the way she sticks her tongue out when she’s happy and her distinctive miaow as she’s very vocal.”

If you would like to offer a cat a new loving home, visit www.cats.org.uk/hands-free-homing for more information.

Willow is happy at home after surviving a traumatic journey