Some cats can be quite chatty with their owners, but it is often difficult to understand what they are actually trying to say. From a howling meow to a short chirrup, they can make a wide range of different noises to communicate their mood, so to help you decipher their complex language we have put together a handy cat chat guide.

Miaow is actually the umbrella term used for a group of cat sounds, including the meow and mew. You can find out more about the meanings of these particular sounds below, but if you’re in doubt about what sound your cat is making, just use ‘miaow’.

What your cat's noises mean:

Translation: Anything from ‘let me in’ to ‘I want some food’

For example, if a cat meows and their owner takes it to mean they are hungry, they will provide them with food. The cat then knows that if they use that meow again, they will get fed. This is why a cat will usually develop their own specific range of meows that their owner comes to recognise, such as a short meow for attention and a longer meow for food. 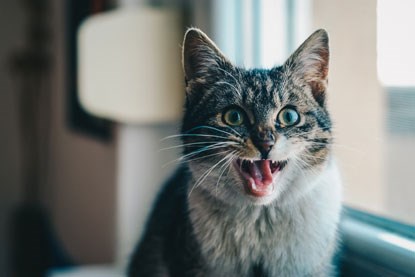 Mew is the name for the cry of a kitten, which it uses to tell the queen (mother cat) that it is hungry or in distress. They begin making this sound a few days after birth but typically stop when they are around two to three months old.

This short trill is usually used by queens when they call for their kittens, but many domestic cats also use it as a way of greeting humans.

A gentle purr is used by queens and their kittens as a way to let each other know that all is well. Adult cats also purr when they’re feeling content, but a more urgent higher-pitched purr could be a signal for attention instead.

*Purring can also be a sign that a cat is in pain, so pay close attention to the context of their purr and if you’re worried then seek advice from the vet.

Cats will growl if they feel threatened, using it as a warning that they will attack if the threat persists. As cats are solitary animals, they typically use low-pitched growling as a way to make themselves more intimidating to humans and other cats, encouraging them to stay away.

Hissing and spitting are defensive behaviours in cats, used to deter any perceived enemy that may be approaching. If a cat is hissing, you should leave them alone as it is likely to be a warning that they are about to scratch or bite.

Why is my cat meowing so much?

Cats rarely have a change in behaviour for no reason – so if your cat is meowing more than normal, try to look at their body language. If their ears are turned out to the side or back, rather than relaxed and facing forwards, that’s a sign that they may be feeling anxious. Similarly, if the eyes and pupils are wide, they might be worried.

If you have noticed a change in the type or frequency of sounds your cat is making, it is best to take them to the vet to rule out any underlying health problems, as it could be a sign that they are in pain. 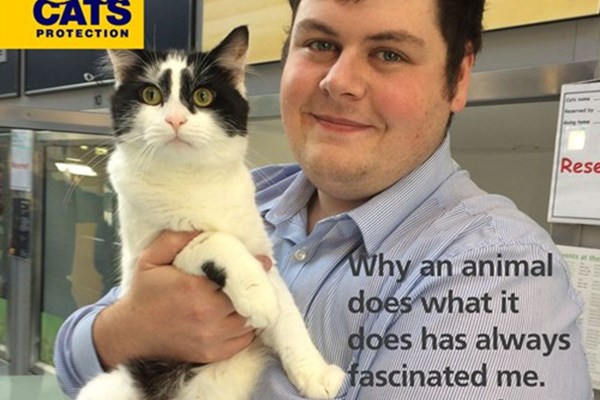 Careers with Cats: how can I become a Cat Behaviourist?