Belfast Adoption Centre appeals for funds for the care of Inky, a kitten rescued from a car engine.

A kitten found hiding in a car engine is on the long road to recovery after having a leg amputated and ear tips removed. 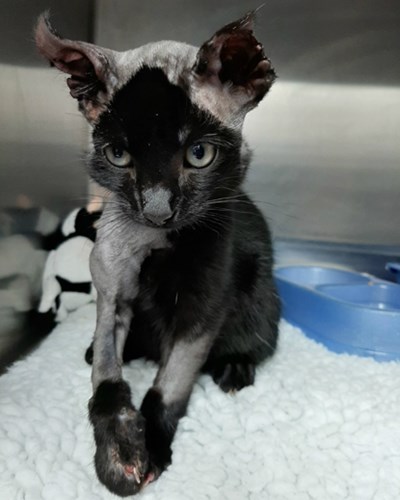 Inky was left badly burned after his ordeal

Named Inky by vets, the black 10-week-old kitten had suffered a complicated break to his right foreleg and his ears had also been singed.

Inky is now being cared for by staff and volunteers at Cats Protection’s Belfast Adoption Centre which is appealing for donations from the public to help pay for Inky’s operation and aftercare, expected to cost at least £800. 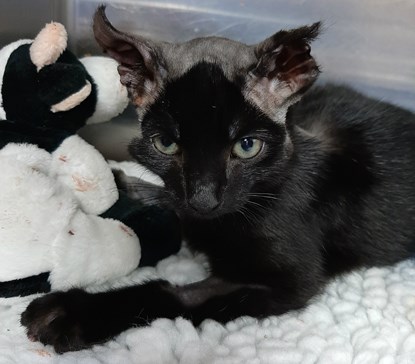 Inky has had to have the tips of his ears removed

The centre’s Deputy Manager, Andrew Doherty said: “It’s not known how poor Inky broke his leg so badly, but we think he probably burned his ears when he was hiding inside the hot car engine.

“His leg was so badly damaged that, sadly, the only option was for vets to remove it. It’ll take Inky a few weeks to recover from the operation, but so far he’s taken it in his stride. 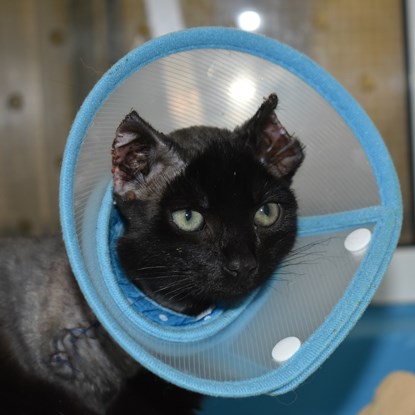 Inky recovering from his surgery

“He’s a very friendly and relaxed kitten and is enjoying all the fuss and attention from volunteers and staff at the centre.

“Inky isn’t yet available for rehoming, but anyone interested in offering him a new home can keep any eye out for him on our website https://www.cats.org.uk/belfast

"He’ll be able to do most things cats do on his remaining three legs, but as he won’t be able to scale fences or escape from potential dangers as well as four-legged cats can, he’ll be looking for an indoor home.” 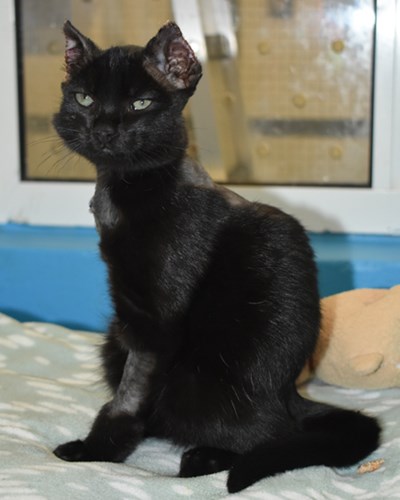 Inky will soon be ready to find an indoor home

If you’d like to help the centre pay for Inky’s treatment, you can donate to the JustGiving appeal.

Andrew said: “We’d be extremely grateful if anyone who would like to help Inky could donate to our appeal – every penny will make a huge difference and help us pay for his operation and continued aftercare.”

Volunteers and staff at Cats Protection’s Belfast Adoption Centre are overwhelmed by the public support for Inky, as his appeal has raised an amazing £3,845.

Centre manager, Bel Livingstone said: “We’re so grateful to the media for telling Inky’s story and for everyone’s love and generous donations for this brave little kitten. 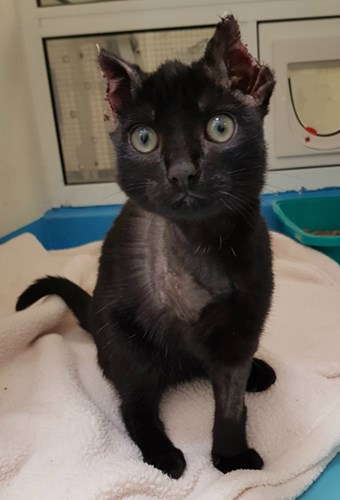 Inky received the treatment he needed thanks to generous donations

“Inky is such a lively, fun loving cat – his little face would fit in the palm of your hand. “His injuries don’t seem to have dimmed his enthusiasm for life at all – or maybe he recognises he’s had a second chance at living.

“However you look at it, his journey is inspiring. So perhaps it’s no surprise that he’s captured the public’s imagination. Our heartfelt thanks go to everyone who has supported Inky.”

The fundraising total includes an amazing £2,000 donation from one anonymous supporter.

The donor, who does not want to be named, visited the adoption centre where he met Inky and the dedicated team of staff and volunteers who have been caring for him. 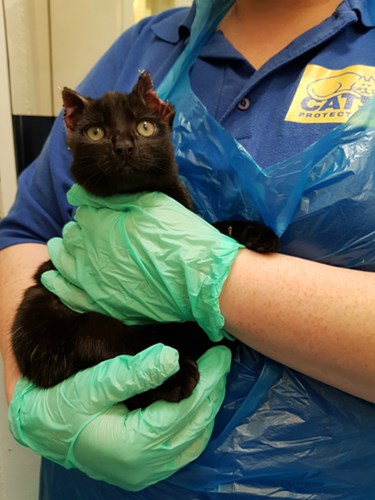 Cats Protection staff are overwhelmed by the public support for Inky

The donor said: “I knew Cats Protection would do more good with that money than I ever could.

“They are heroes, every one of them. It’s a privilege to be able to help them keep doing what they do every day for Inky and so many others like him.

“Thank you so much for letting me meet Inky – he’s a wee hero, just like you!”

Inky, who already has a permanent home to go to, continues to recover well from his ordeal.

Any funds raised above and beyond those needed for Inky's care will go towards helping other cats and kittens in the centre.