Five-year-old boy reunited with his 'best friend', Phoenix the cat.

Thousands of cats go missing every year and thankfully, many return home, sometimes months or even years later as though nothing has happened.

In 2015, we reunited 3,000 cats with their worried owners thanks to microchips. Despite this, many cat owners don’t microchip their pets.

Microchipping cats is a safe and permanent way of identifying them. If a microchipped cat gets lost, they are much more likely to be reunited with their owner than a cat that doesn't have a microchip.

But owners do need to remember to keep their contact details on microchips up-to-date. 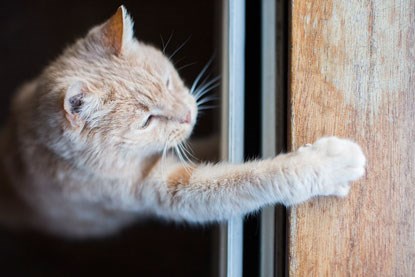 Ten-year-old Phoenix, who had been missing for 18 months, was only found by his owner Michelle Humber when she visited our Derby Adoption Centre in search of a new pet. The ginger tom cat vanished from the family’s home in May 2014 and despite their attempts to find him, he never turned up.

Although Phoenix was still registered to Michelle with a microchip, the family had since moved home and as his details had not been updated, the adoption centre was unable to get in touch.

Michelle’s five-year-old son Ronnie noticed Phoenix straight away and cheered with excitement at the sight of his 'best friend'.

"He was purring as soon as we went over to him and it was amazing to be able to hold him", said Michelle. "The staff were brilliant, I'm not sure if they've ever seen something like this happen."

This lucky reunion reinforces the importance of microchipping – and ensuring contact details are kept up-to-date. If you move home or change any of your details, you can update your cat’s registered details by contacting your existing UK database company; or Petlog on 0844 4633 999 or via www.petlog.org.uk; or Anibase on 01904 487 600 or via www.anibase.com

June is National Microchipping Month. To find out more about the benefits of microchipping, visit https://www.cats.org.uk/help-and-advice/neutering-and-vaccinations/microchipping-your-cat