James Baydar from Worthing has set himself a marathon challenge to raise money for Cats Protection.

52-year-old James, who moved to the UK from his native Turkey in 1994, is supporting our Worthing & District Branch in remembrance of his cat called Nermal.

With four half marathons down, James has a further 17 to go, with most taking place in and around his Worthing hometown, due to travel restrictions. 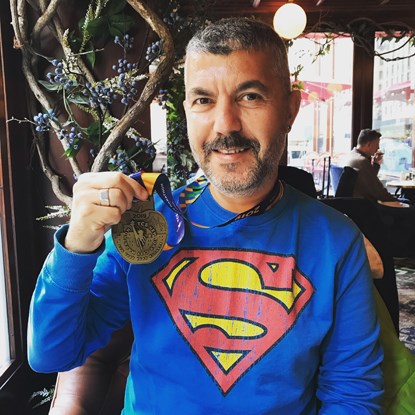 James said: “I wanted to do something in memory of my cat Nermal, who sadly passed away a couple of years ago, and to support my local branch of Cats Protection, who have felt the financial strain of the pandemic.

“Originally I was going to run the Great North Run 2020, but when that did not happen I came up with the idea of running 21 half marathons.”

The challenge should end with the Great North Run, which is officially the world’s biggest half marathon. If the event on Sunday 12 September cannot go ahead as planned, James will return to his local streets instead.

James, who is a certified energy healer, interviewed major names such as Debbie Harry, Björk and Nick Cave during his previous career as a music journalist. Unfortunately, the pandemic put his alternative therapy practice on hold but he has been filling his time with running, training and learning to play the piano. 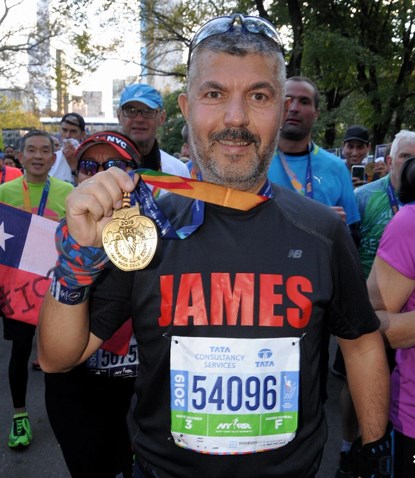 James after running the New York City Marathon in 2019

James took up running 10 years ago and has completed four full marathons, including the New York City Marathon twice, as well as dozens of half marathons - 16 in the past year alone. Most recently he completed a 1,743k virtual challenge, covering the distance between Land’s End and John O’Groats in 153 days.

He said: “I don’t know what attracted me to running in the first place. One day I popped out for a run and I haven’t stopped running since. I’m neither Mo Farah nor Eddie Izzard; I’m just someone who enjoys the escapism of running.”

Tackling 21 half marathons between January and September means running one every 10-12 days, but James is taking it all in his stride.

“It’s 276 miles in total, which is not such a big deal but it does take some planning,” he added. “Training is going well so far. Funnily enough, I run much better in the winter. I use a couple of apps to analyse my runs and to post proof of the half marathons on my fundraising page.” 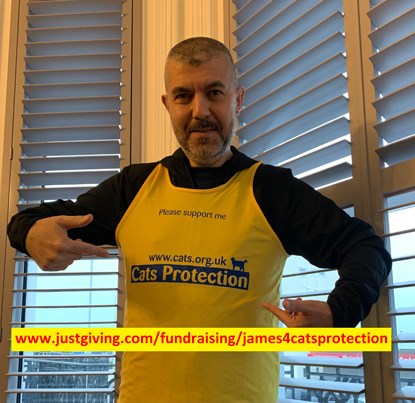 James is running for all the local cats in Worthing

Eric White from our Worthing & District Branch said: “James is a regular bargain hunter at our Worthing shop and the team knows him very well - and Hugo his dog too. We are delighted that he has committed to such a tremendous challenge to support our work for better cat welfare in our town.”

Gina Rogers, Cats Protection’s Challenge Events Officer, said: “James is a star for setting himself such a gruelling challenge. Fundraising has been badly hit by the pandemic but the work goes on at our branches and centres, so the efforts of people like James is all the more valuable to us and to the cats in our care.

To support James’ fundraising challenge you can donate via his JustGiving page.

If you would like to take on your own challenge for cats, visit www.cats.org.uk/challenge to find out how.

Cat-lover runs over 2,000 miles along virtual Route 66 for cats in need