Terrified kittens in quarantine after being smuggled into Britain.

Four frightened kittens face nearly two months in quarantine after being smuggled into Britain on a lorry from Hungary.

A spot check by UK border authorities at the Port of Dover revealed the tiny kittens locked in a freight container, likely without food or water. When questioned, the lorry driver could not produce any documentation to prove the kittens were his or that he had pet passports to transport them into the UK. 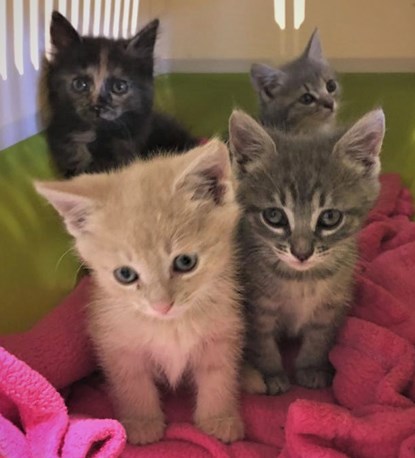 Realising the risk of prosecution, and to avoid being liable for the cost of putting the kittens through quarantine, the driver agreed to sign over the litter to the government’s Animal and Plant Health Agency. Unfortunately, quarantine catteries and kennels at the port could not take them in and the kittens faced the risk of being put to sleep.

Animal rescuers stepped in and the kittens were given temporary sanctuary at a rescue centre until they could be transported to a quarantine cattery, where they will remain for seven weeks, before being homed by Cats Protection.

Cats Protection Team Manager Karen Corbin said: “These four little mites have swerved a tragic end more than once in their short lives. Their journey in a freight container would have been pretty horrid and then their luck nearly ran out when they couldn’t find anyone to take them at Dover.

“If only they could talk, they’d have a few tales to tell. But they’re in good hands now they will be rehomed to loving homes when they come out of quarantine.”

If you would like to donate to the cost of caring for the kittens in quarantine and preparing them to be homed please visit www.cats.org.uk/donate