Our Stafford & District Branch turns 25 this year – we look back on how it all began.

Cath Keitley, Co-ordinator of our Stafford & District Branch, looks back – and forward – as the branch celebrates 25 years of helping cats…

That’s how the conversation with Margaret Aitkin, the only founder member of Stafford & District Branch, still with us, began. Then the reminiscing began. It started as Stafford Branch back in 1986, but the title belied the actual area it covered as we went as far west as Newport, Shropshire, south to Coven, east to Uttoxeter and sometimes beyond and north to Stoke. A massive area when you consider there were just a handful of volunteers to start with. 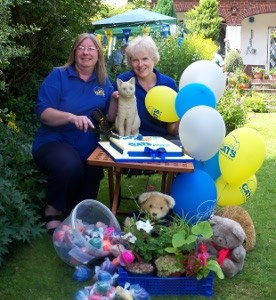 Joint Co-ordinators at the time were Jane Horne, sadly deceased, and Linda Boden. Margaret Aitkin was on the Committee, a Fosterer, Fundraiser and did just about any other job the branch needed doing, she was joined by Di North, also sadly deceased, who helped with fundraising. I joined just a few months later and, to this day, realise what a wizard Jane was at snaring the unsuspecting volunteer. She was a straight-talking, no-nonsense lady who could weigh up a person within seconds and she wasn't often wrong. Thankfully I passed the 'Jane test'.

I met her and Linda one Friday evening at Linda’s home where the branch had a small cattery. They were in the kitchen surrounded by mounds of sandwiches, clingfilm and sticky labels. It wasn't long before I was helping to wrap the sandwiches and label them for a fundraising event at a cat show the next day. I ended up manning the stall and, thankfully, the sandwiches all sold. The money raised provided the cats and kittens with food for a week and went a long way towards paying off a huge vet bill. As soon as I knew that I was hooked.

Gradually the membership grew. Some volunteers could just help for a few hours a week manning a stall, the occasional fête or doing the odd car boot. It didn't matter how few hours people gave, they all mounted up and gave a chance for the others to have a bit of a rest. This will all sound so familiar to those branches who can remember starting out. In the 1990s, we made the decision to officially become the Stafford & Stoke Branch. We remained that for a number of years until a group of volunteers in the Stoke area decided to start their own branch. This was a big relief to us as we had few people there and found the journeys to and from the Stoke area quite a drain.

For a number of years we have had a market stall in Stafford’s indoor market which brings in much-needed funds, cat food and generally promotes CP in Stafford. We started off with the smallest stall the market could offer us, but its success has meant a gradual expansion over the next several years. We have quiet periods but all in all it is very successful.

The other thing that grew was the number of cats needing our help, from domesticated cats who had had kittens to ferals of which there were quite a lot in our very rural area. It's a double-edged sword in that the more people that heard about us, the more people came to us for help. It did mean that numerous cats have been neutered over the years helping to reduce the number of kittens that needed to be rescued and rehomed. Despite this, we still get a lot of calls from the public whose own cats have fallen pregnant. It seems people never learn. 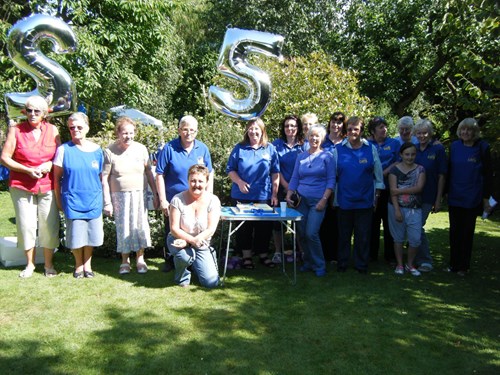 More of the branch's volunteers join the celebration

From our humble beginnings with just a handful of volunteers we have gone from strength to strength and now have over 40. They bake cakes, knit, visit potential homes, fundraise, foster, do paperwork. Individually some give an hour a week, others far more, but together we give a massive amount of time and effort to make our branch the success it is.

We never stop looking to the future and, to celebrate our 25th anniversary, we have just taken delivery of our first CP vehicle courtesy of a very generous legacy left by a friend and supporter. We will be forever grateful to her.

As to the future, a shop would be good, more foster homes, more volunteers, more money… the list goes on and you can be sure if we put our minds to it we usually get there no matter how long it takes. So look out for our report when we celebrate 50 years!

Why I foster for Cats Protection