Ann Mason, a 61-year-old pharmacy technician, had noticed a visibly pregnant tortoiseshell cat roaming around the neighbourhood and thought nothing of it.

Then her husband believed he heard yowling in the roof and a lady arrived at their door with the noticeably thinner cat, searching for missing kittens. 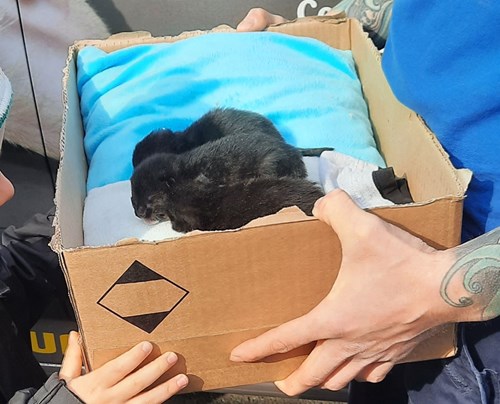 The three kittens rescued from the attic. Credit: Ann Mason

“My husband, Tyler, initially thought he must be hearing things as we have two dogs and were certain they’d have reacted to a cat in the house,” said Ann. “But when a lady knocked on the door and said she had followed her cat to our house, we realised we needed to do some exploration.”

The couple’s bungalow had been damaged during Storm Eunice, with the underside of the roofing ripped away in one section. As Ann and the cat’s owner walked around the property listening for kittens they spotted the hole in the roof and feared the worst. Upon advice from a vet, Tyler called our Cornwall Adoption Centre. 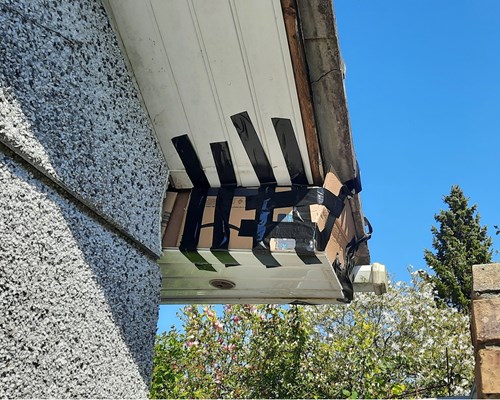 The hole in the roof, now covered up, that the cat used to get into the attic. Credit: Ann Mason

“Once we realised the kittens might be in the attic we had no idea what to do,” added Ann. “I had quite a sleepless night before we contacted Cats Protection and was really worried to think that there might be such young creatures stuck up there.”

Cat Care Assistant Jason Reading arrived and began investigating the part-boarded attic but found no sign of kittens. There was grass around the hole in the roof where their mother had been coming and going and he suspected the kittens must be close by.

Trusting his instinct that the mother cat would help him locate her little ones he asked the cat’s owner to lift her up to the storm-damaged space. 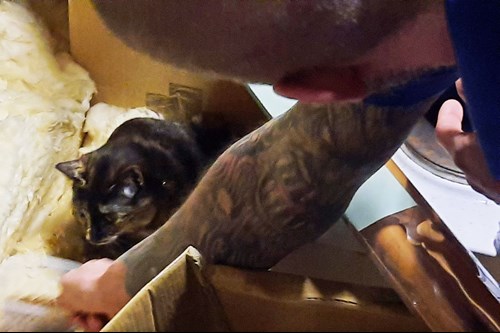 Jason with the mum cat in the attic. Credit: Ann Mason

“I watched her skulk in, nose around and then tiptoe over the insulation foam,” said Jason. “As she went further into the attic one of her week-old kits gave out a tiny mew.

“She led me straight to the nest she’d built and very carefully I reached in and out came two girls and a boy. They were so young their umbilical cords were still attached and they were all jet black apart from occasional white markings.”

Jason’s quick-thinking worked and the kittens were rescued. At a week old kittens cannot survive for long without their mother. Their eyes are not yet open and they rely on her for food, warmth and toileting. 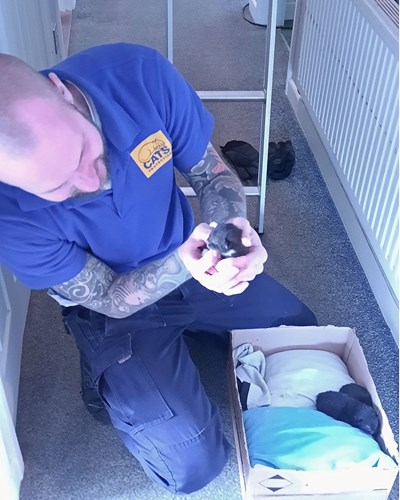 “We were really grateful to Ann for her perseverance and for letting us look around in the loft,” said Jason. “Thanks to her, the kittens are safely back with their mother in their owner’s home.”

Wary that the situation might be repeated, Ann added: “The cat had travelled around half a mile from home to get to us, so she clearly liked the space. We’ve blocked it up now just in case she decides to have another look!”

Cats Protection advises cats should be neutered from four months old to avoid unexpected litters. Find more details about the benefits of neutering as well as information about financial assistance for those with a low income. 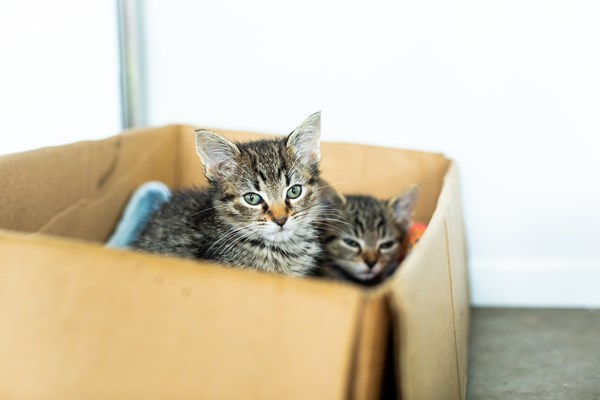 What to do if you find an abandoned kitten