A stray cat in Norfolk has narrowly avoided a leg amputation after her collar caused painfully infected wounds.

Residents in the Wisbech area had seen a cat limping for several weeks during winter but nobody could coax her near to check on her. 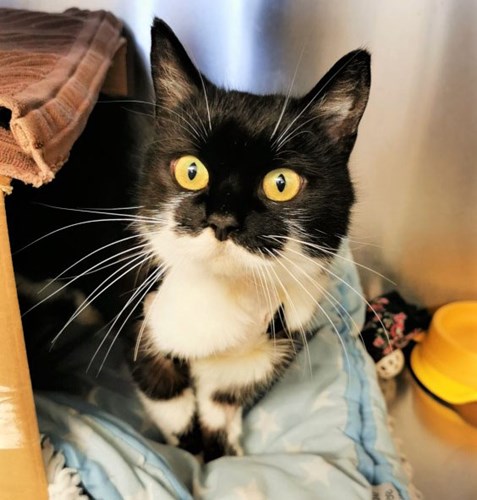 Louise the cat is recovering from her ordeal

When locals eventually managed to get a closer look at her injury, they asked Cats Protection for help.

Downham Market Adoption Centre Manager Lindsay Tempest said: “Many people had shared photos on a local Facebook group saying she was limping and badly injured. When nobody came forward after repeated posts, someone tagged Cats Protection and appealed for help.”

After checking that the cat, who has now been named Louise and is thought to be just 18 months old, could be caught safely within COVID-19 guidelines, a humane trap was set with smelly sardines and tuna. Not long after, she was trapped and the Cats Protection team moved in.

Although a collar suggested that Louise had been someone’s pet at some point, she was not microchipped and repeated appeals to find her owner have been unsuccessful.

From the time she came into care, it was clear that Louise needed urgent veterinary attention. Her front leg had looped under her collar, causing deep wounds in her armpit that had become badly infected. 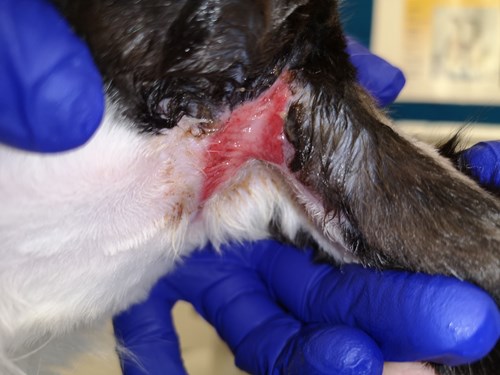 Louise's nasty wound on her armpit, caused by her collar

Vets acted fast, cutting off the collar, giving pain relief and cleaning the open wounds. Skin had begun to grow over the collar, causing the wounds to become infected. She also had ear mites, a tick, muscle damage and swelling to her joints and limbs. This poor girl had been in discomfort and pain for some months.

Lindsay said: “She had managed to get her front leg through the collar. Over time the collar had embedded into her armpit and was causing an open wound, which then became infected.

“We thought we may have to amputate her leg. The infection was so bad that we needed to get that under control before exploring the best option for her. She has had two operations and her wounds need regular flushing and dressing to aid healing. But it’s still touch and go.” 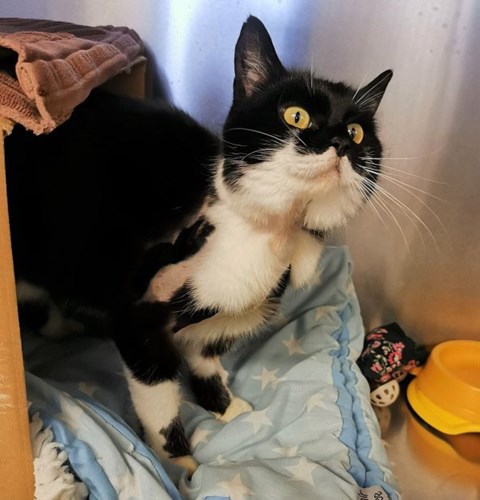 Once she is fully recovered, Louise will be ready to find a new home

Louise’s growing vet bill has already topped £1,300 and, in a year when fundraising has been hit hard, Cats Protection is appealing for help. If you would like to make a donation towards her care, visit our JustGiving appeal. Any donations above and beyond those needed for Louise will be spent on other cats in our care.

Sarah Elliott, Cats Protection’s Central Veterinary Officer, said: “We have seen too many injuries caused by collars, where cats have got caught while playing, hunting or trying to escape from danger.

“A cat’s leg or jaw may become caught in an elasticated or ill-fitting collar and this can result in serious injury. In their desperation to get clear, their legs can get stuck under the collar or the collar can travel down around their chest, getting tighter and biting into their body and causing open sores.”

Cats Protection believes that all owned cats should be identified in order to trace their owner should they become lost or injured. The preferred method of identification is an implanted microchip as this is permanent and safe.

If an owner also chooses to fit a collar with their contact details attached, we advise that only a 'quick release' or snap-opening collar is ever used, not an elasticated one. Then the cat would be less likely to be trapped should the collar become caught or tangled, keeping them safer from injury or death.

Making sure the collar fits correctly is also important. Two fingers should fit snugly underneath the collar to ensure safety and comfort and damaged collars should be replaced immediately.

For more advice on finding a safe and effective cat collar, visit https://www.cats.org.uk/help-and-advice/getting-a-cat/choosing-a-cat-collar.