For Mature Moggies Day (16 June), discover how the love of an older cat can help combat loneliness and improve wellbeing

As loneliness becomes an increasing public health concern, finding companionship with a loving mature moggy could be the answer.

Older cats take three times longer to find new homes compared to kittens but they have so much love to give someone in need of a friend.

“It’s a common misconception that older cats don’t play or interact much with owners, when in actuality, mature cats are just as loving and playful as younger cats,” said Cats Protection Behaviour Officer Daniel Cummings. “In fact, it could even be easier to introduce a mature cat to your home than a younger cat or kitten. Mature Moggies Day is approaching on 16 June and we are hoping to show people that an older cat can make the perfect companion, especially if you are battling loneliness. 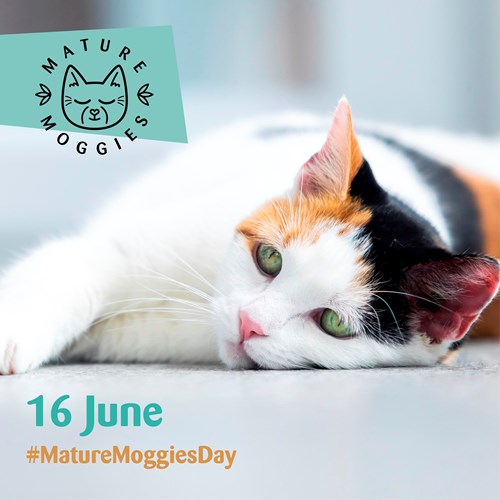 “Loneliness is something that is affecting millions of people across the country, particularly as they adjust to life after lockdown. Cats can help prevent feelings of loneliness in all sorts of ways, whether providing entertainment through play or being there for a soothing cuddle. Often, people tell us it is a great source of comfort to simply have another living being in the home to care for and talk to.”

Nine out of 10 cat owners think that owning a cat has a positive effect on their mental wellbeing, and nearly two-thirds of owners who regularly work from home say their cat helps them by calming them down.

Ahead of Mature Moggies Day, we spoke to some contented mature moggy owners about the benefits of adopting a senior ‘kitizen’. 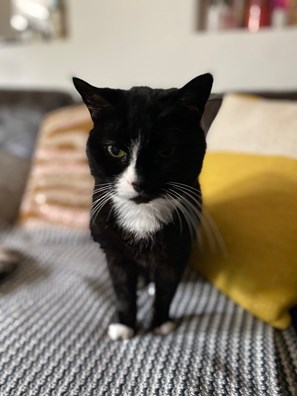 At age 20, Gizmo was adopted from our Harrow Homing Centre by Jenny and Declan in March 2022.

“We really wanted to be able to give an older cat a final, loving home,” said Jenny. “As soon as we met Gizmo, we knew it was meant to be.

“There's the obvious concern that you'll bond with a cat that may not be with you for that long, but that was massively outweighed by the fact that we knew she could have a happy, loving home.

“Gizmo settled in super quickly it almost took us by surprise. Within a few days of coming home with us she was jumping up on the sofa for cuddles on her dad's lap, which has become her favourite thing to do.

“Gizmo is very sociable and surprisingly energetic and agile for an older lady. She loves fuss and attention, especially head scratches and grooming. It took us a little while to figure out her play habits (and we tested a good few toys), but she loves chasing a ribbon around the living room, embracing her true hunter skills.

“To us adopting Gizmo hasn’t been much different to having a younger cat. She's just as lively as a cat half her age.” 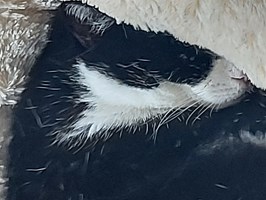 “I instantly felt for Poppy,” said Donna. “I worried that because of her age she would be passed over by people tempted by the younger cats. On meeting her, I was immediately struck by how affectionate Poppy was and fell in love.

“She plays a lot and walks all over me, figuratively and literally. As a widow, it's lovely to say hello and be greeted when I return home. I now set my alarm 20 minutes early each morning as when it goes off, Poppy springs up and has a good cuddle.

“Poppy is an absolute joy. She's adopted me as much as I have her and she sleeps on my late husband’s furry jacket or in her cat bed.

“I totally recommend an older cat for company, as well as for the feeling of helping an animal that deserves love later in life. Also, they can make a calmer, placid pet. Poppy is mine for the rest of her life. I thank her for choosing me and I like to think she feels the same about me.” 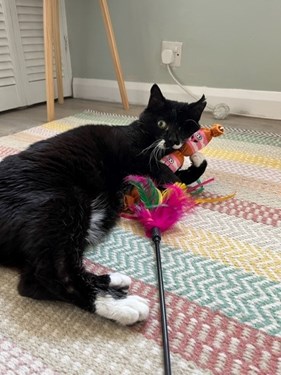 Joe was adopted by Amy from our East Surrey Branch in 2014, and he is now around 15 years old.

“Joe is my amazing old boy who has helped me through some personal challenges over the last couple of years,” said Amy.

“Unfortunately my marriage broke down during the COVID-19 pandemic and, although I am completely fine now, it took a while to pick myself up and get back to being happy and also getting used to living on my own. Having Joe around really gave me a focus, and I genuinely believed that he saved me. He has been like my shadow and was always there for me when I was feeling down or overwhelmed with the situation. Joe has a very calm and chilled personality, but can be cheeky at times, and that is exactly what I needed!

“I’ve had a challenging few years, but Joe has been my light in the dark, and was my inspiration to start fostering for Cats Protection last year.

“Adopting an older cat is very rewarding, and it’s nice to know that you are helping them have a comfortable life in their retirement years. My experience of older cats is that generally that are calm and extremely loving.” 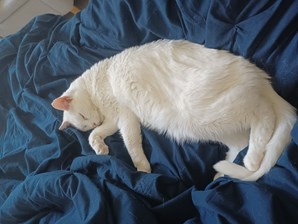 “We were looking for a cat who might be happy in our smaller flat,” said Maddie. “One that didn't need as much space as a kitten and that was friendly and happy to be an indoor pet. When we met Snow, he came right up to us and insisted on cuddles. We knew right then that he was the right cat for us.

“I was a little concerned about making sure that his quality of life was high as he continued to age. But we found a cat clinic that specialises in older cats and they have given us great advice on caring for an older cat.

“Snow settled right in. He instantly began investigating and now has found his favourite napping spots. He also likes to follow us around the flat, particularly if we are cooking something that smells good.

“Snow is utterly obsessed with chips. He's not allowed to have any, but that doesn't stop him from trying to sneak one whenever he can. It's like a switch flips inside him once he smells them and he's completely enthralled. When Snow does not feel he is getting enough attention he gives you a little headbutt and keeps his head pressed against your arm or leg until you begin to pet him.”

Find a mature moggy looking for a loving home in your area, and take a look at our advice for caring for an older cat.