Ageing cat who had litter after litter of kittens is finally neutered and can relax in her new home.

This is Betty and her kittens. On first impression she looks like an idyllic queen with her brood feeding nicely in a loving home; a well-loved cat having perhaps her second litter of kittens. Sadly, this couldn't be further from the truth.

Betty was found in a dark, dingy and filthy garage corner covered in junk and with a broken toe, unable to move. The kind lady of the house had called the Coventry Branch for help as she wasn’t the cat’s owner and was at a loss as to what to do.

When we arrived on the scene it was already getting dark and was quite cold. Betty was very calm and allowed us to help her. Two of the six kittens had already passed away in the cold. I quickly scooped up Betty and the kittens and took them all back to a warm travel cot. Later, the remaining four kittens sadly passed away. 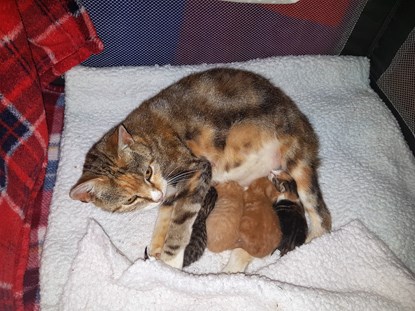 If the truth be known, Betty wasn’t like some young healthy queens with her second litter – she was an ageing cat with what could have been her tenth litter if not more! She had had a terrible life having litter after litter of kittens until she got herself stuck in that garage. Her original owners hadn’t had her microchipped or neutered so we set about finding her a new home.

She could have had a lovely easy life, free from all that grief. Only once Betty had been rescued and given some true love and care did she eventually come out of herself and show her true beautiful character. If only Betty had been neutered in the first place. 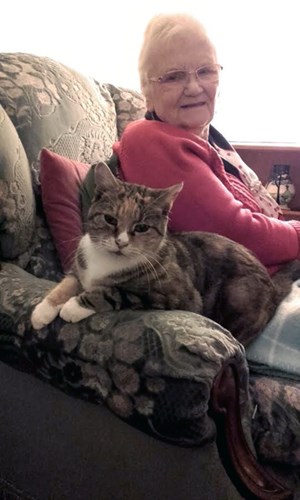 After being neutered and rehabilitated by Cats Protection, Betty was rehomed to a lovely lady who really loves and cares for her. At long last she has found her forever home.

Cats Protection champions neutering as the only effective way to reduce the number of unwanted cats in the UK. Neutering also prevents some cancers and infections and stops female cats from wailing when in heat. Our recommended neutering age for your pet cat is four months. Find out more about neutering at www.cats.org.uk/what-we-do/neutering