Cats Protection’s Stourbridge, Dudley & Wyre Forest Branch are appealing for help after majestic Angel came into their care needing surgery to remove an air gun pellet lodged in her neck. 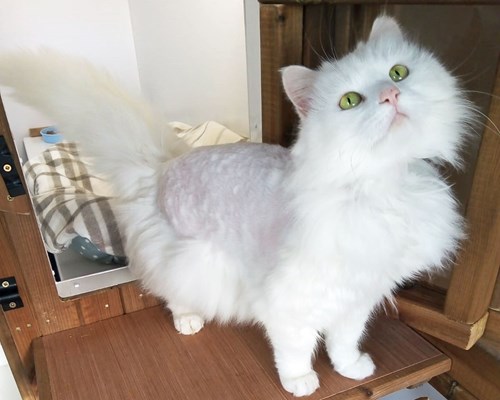 Named because of her gentle temperament and distinctive pale coat, Angel arrived at the branch after a lady spotted her struggling to integrate with another group of rural cats on the outskirts of Stourbridge.

It wasn’t until Angel was in our care that volunteers discovered she was not only lost without a home but had also been cruelly wounded.

When they went to collect Angel, the volunteers also found a number of strays in need of care and attention. However, Angel stood out as a loner who liked to be fed away from all the other cats. She had no microchip and her coat was grubby and unkempt from her struggle to survive outdoors.

Once Angel was safe and warm, her fosterer began the painstaking task of trying to gently untangle her fur. As she groomed the forlorn cat she discovered a lump on Angel’s neck. Concerned that it might be a cyst or tumour, Angel was taken to the vet where x-rays revealed she had been shot with an air gun and a metal pellet was still lodged inside her. Once the pellet was removed it was revealed as a pointed pellet, most often used for hunting. 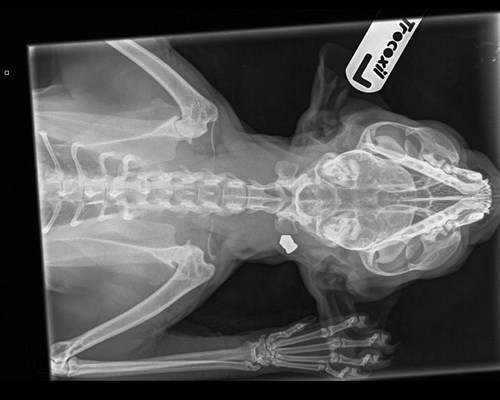 Angel's x-ray showing the air gun pellet in her neck

Branch Coordinator Pauline Hollyoak explained: “Angel was really thin, dirty and her long hair was very matted when we picked her up. Her new foster mum sat for hours getting all the knots out of her coat. Angel was so relaxed and gentle – she never once hissed or snarled. A few of the matted areas did persist and she had to have her coat shaved in areas by the vet to remove those.

“I was worried that she might have a tumour when the lump was first found and was both relieved and horrified when the vet said it was a pellet from an air gun lodged in her neck near her head. Thankfully it wasn’t too embedded, but would have been shocking and painful when it happened. If it had been any closer to her brain or spine it could have caused terrible damage or even killed her.

“We needed to remove the pellet as soon as possible as sometimes they can start to move and potentially cause ongoing pain and problems for the cat. It was horrific to see the picture of the pellet that had been removed - I can only imagine how scared she must have when she was shot and the agony it caused. 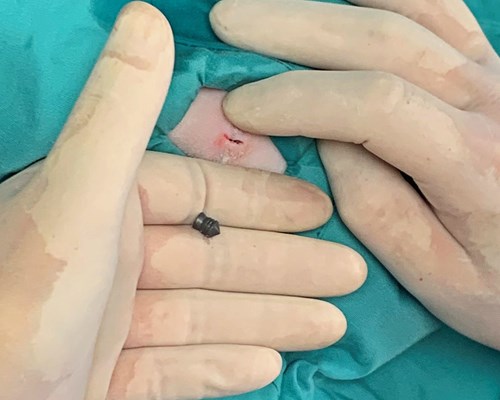 “Angel’s surgery went well and she is now recovering with her fosterer. We would be extremely grateful to anyone who might be able to help us cover her vet costs. We’ve had some generous donations so far from our wonderful supporters and are hoping to reach £300. Every penny really does make a difference.

“While we were collecting Angel, we were able to catch another white cat named Snow who had significant ear problems and is receiving treatment. There are also some other cats left in the area where they were found who we are feeding and will bring into branch care as needed. Hopefully none of them will have suffered like Angel and any funds raised over and above our target will go towards helping them and other cats in our care.” 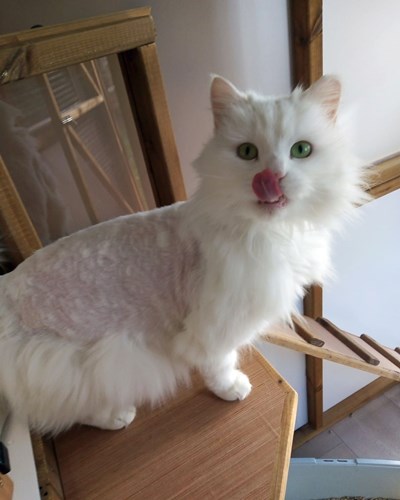 If you would like to donate towards the costs of Angel’s surgery and care, you can do so via the branch’s JustGiving page.

Cats Protection is campaigning for the licensing of air guns, which already exists in Scotland and Northern Ireland, to be introduced in England and Wales. We have seen over 115,000 supporters sign our petition in support of the measure and over 50,000 members of the public responding to a government call for evidence, which was launched in October 2017.

Senior Advocacy & Government Relations Officer at Cats Protection, Madison Rogers, said: “At Cats Protection we often hear terrible stories of cats like Angel who have suffered injuries as a result of being shot with an air gun. Our research shows that 90% of air gun attacks on cats reported in the press happen in England and Wales where these lethal weapons are not licensed. The misuse of air guns is also a concern for the wider community and the safety of everyone in local neighbourhoods. Prevention is always better than prosecution, and a modern sensible approach of air gun licencing is needed to deter the shootings of cats and other animals.”

To sign our petition calling for the licensing of air guns in England and Wales, click here.