Rainbow first arrived at our Bridgend Adoption Centre in 2018 as a tiny month-old kitten.

As a stray she had been taken in from a feral colony where she had been extremely underweight at just 0.49kg. 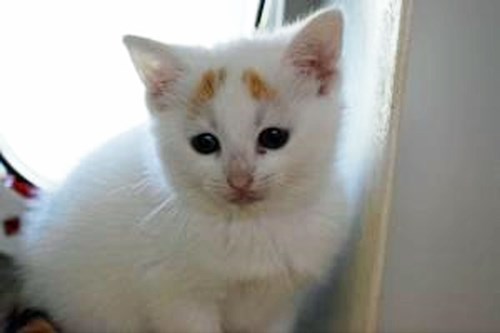 She had been nursed to health and went to live in a new home where she was cared for and happy. Unfortunately, her owner became increasingly unable to manage the weight that Rainbow was gaining.

As soon as the centre team heard that Rainbow was returning to their care, they rushed to greet her, but were not expecting to find a cat weighing 12.7kg – three times the weight of the average cat. 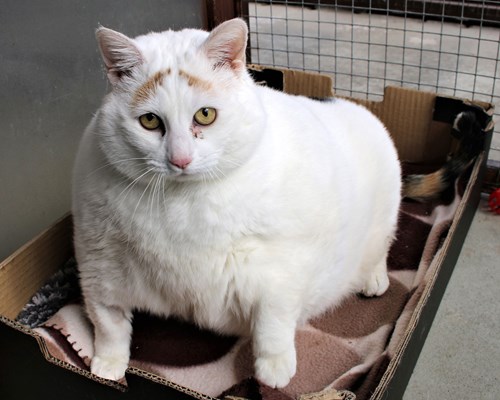 Forlorn Rainbow back in our care at three years old

“To be honest we were shocked when we saw Rainbow,” said Centre Manager Sue Dobbs. “We knew her weight had been a struggle and that was why she was coming back into care, but she is one of the heaviest cats we’ve taken in.

“To remember how she had been so tiny that we didn’t think she would survive, and then to be faced with a cat whose joints and organs were under pressure from the excessive weight, and who was so big she couldn’t play or even run from danger if she’d needed to, it was terrible.”

Rainbow’s weight wasn’t the only problem. Because of her size, the young cat could not groom properly or clean herself after toileting, which are essential cat behaviours. Her eyes were red and crusty. She was infested with fleas because an individual parasite treatment would not contain enough medication to treat her size. 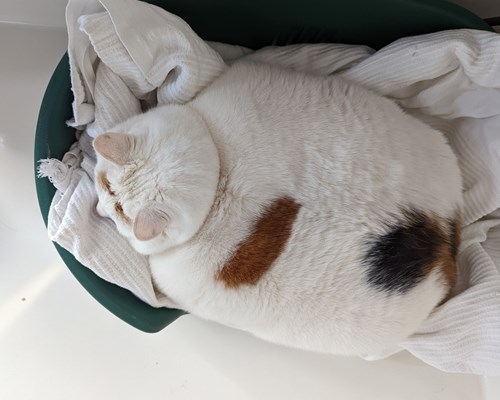 Rainbow weighed 12.7kg when she arrived back at the centre

Worse still, Rainbow had urine burns, total fur loss and inflamed sore skin around her rear-end and legs which needed to be shaved, bathed and treated.

“Poor Rainbow was sore, itchy and unclean,” added Sue. “Not being able to express her natural behaviours such as hunting, playing, running and hiding will have left her feeling depressed and fearful.

“We know overfeeding Rainbow wasn’t intentional and she was on a special diet when she arrived at the centre, but she was truly a victim of being slowly killed by kindness. Too many treats or large portions combined with minimal exercise soon takes its toll on cats.” 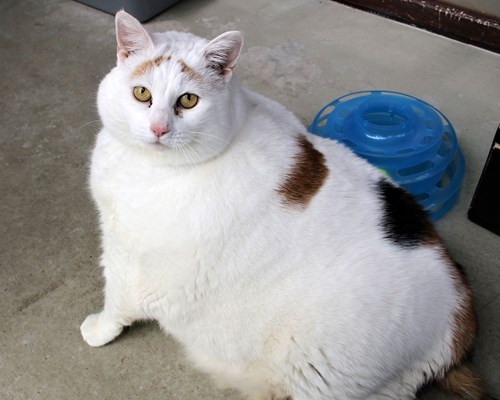 Rainbow was put on a tailored diet and provided with plenty of opportunities for exercise and mental stimulation. Her skin conditions have been treated and she has now reached 8kg, but there is still a way for her to go.

The centre will be looking for a new home for her once her weight has dropped further and she has been given a clean bill of health by the centre’s vet. Her new owners will need to maintain her calorie-controlled diet and keep a close eye on her weight, as cats are more likely to put on weight when they have previously been obese.

If you would like to offer Rainbow a home, keep an eye on the Bridgend Adoption Centre website for updates on when she is available for adoption. 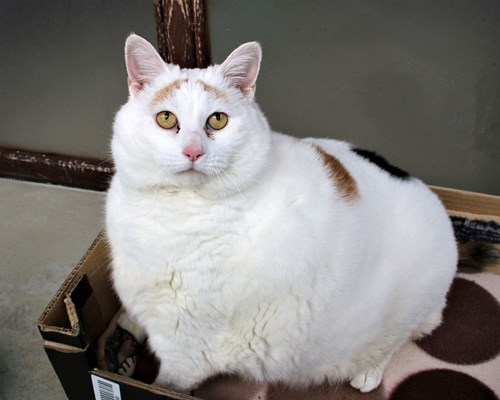 “While most cat owners have a strong bond with their cat, they may be tempted to over-indulge their cat with food or treats,” said Dr Sarah Elliott, Cats Protection’s Central Veterinary Officer. “Owners may do this out of love or to make their feline feel like a family member. Sadly, we are doing them more harm than good as overweight cats are at significant risk of diabetes, joint problems and urinary infections.”

Find out if your cat is overweight and how to help them lose weight with our cat obesity advice. Anybody with concerns about their cat’s health or weight should speak to their vet.

This year, players of People’s Postcode Lottery are helping to cover the costs of looking after cats like Rainbow in our centres. Their support has funded the care of around 50 cats at the Bridgend Adoption Centre over the past year.