Tansy was picked up after a cat and litter of kittens was reported to our Cat Watch project in Warrington, which works with communities to improve the lives of stray and feral cats. 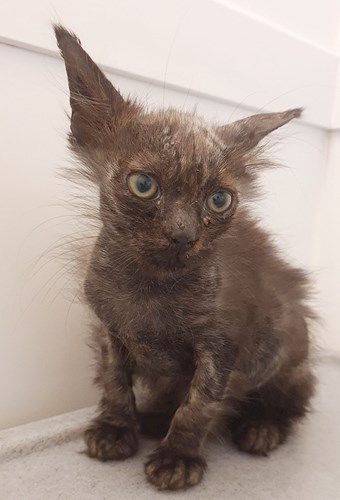 By the time volunteers found their location, the mother cat had moved on, leaving behind just one of her kittens.

At roughly just five weeks old, the Tansy’s threadbare appearance and inflamed skin indicated she was clearly unwell and it was suspected she had a severe case of ringworm, a fungal disease that can cause nasty infections if left untreated.

Tansy was admitted to the isolation unit at our Warrington Adoption Centre, where skin samples were sent off for confirmation of ringworm. Once confirmed, she was started on a course of treatment which will take a minimum of six weeks to complete.

It is hoped that the initial course will be enough to eradicate the disease and Tansy will once again be back up to full strength, with her fur expected to quickly grow back. 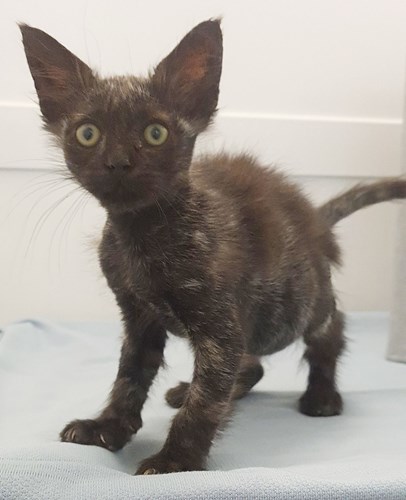 Lindsay Kerr, Warrington Adoption Centre Manager, said: “We were grateful we were able to locate Tansy but she was in a sorry state when she came into us. Fortunately, we were able to quickly start her on the right course of treatment. There was a worry that because she was so young she wouldn’t know how to eat – but she soon found a love for freshly cooked chicken!

“All our work to help cats and kittens like Tansy is funded by the kind generosity of our supporters. We are so thankful that people care as much about cats as we do and choose to help fund this vital work helping felines in need.”

If you would like to contribute towards the high cost of Tansy’s treatment, which will include the ringworm medication as well as neutering and vaccinations you can donate via the centre’s JustGiving page.

Because of her young age, the team at the centre are investing time and patience to get Tansy back on her paws, ready for adoption when the time is right. A carefully planned socialisation programme involves introducing kittens to different experiences, including playing with toys and being handled by humans, as well as being exposed to usual household noises so they are not fearful when going to their new homes.

If you would like to welcome a new feline friend into your home, find out how to adopt a cat from us.