One-year-old cat Smurf is just one of three cats recently brought to Cats Protection with sunburnt ears that had turned cancerous and needed to be removed. 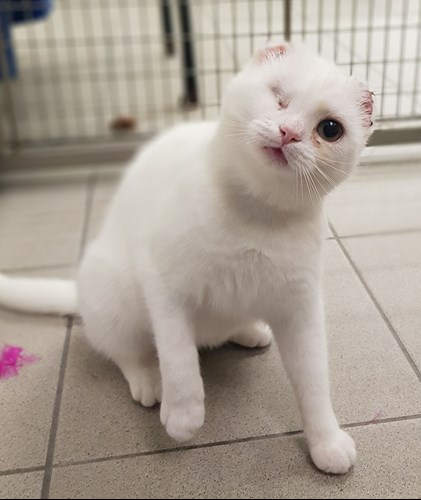 Smurf had to have her right eye and ear tips removed

Smurf was found in a very bad state when she was picked up on the streets last autumn. As well as having received a nasty gash on her head, thought to have been sustained in a car accident, her eyes were ulcerated and her ears were sun-damaged.

She was rushed to a vet who had to remove her right eye and her ear tips and then she was taken to our Belfast Adoption Centre to recover.

After her ordeal, it didn’t take long to find her a new home with Kate Large. 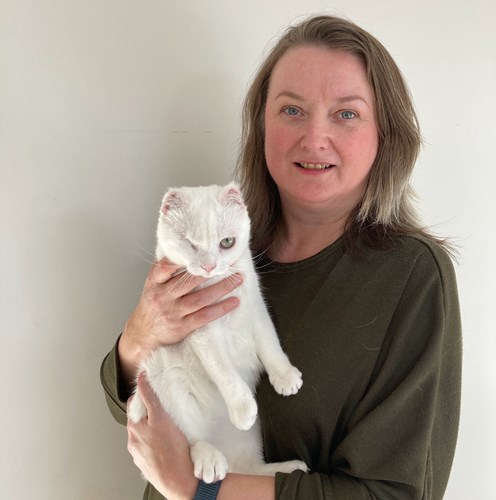 “Once I saw the pictures of Smurf, I did two things - well, three actually,” said Kate. “I gasped out loud, got very teary, but immediately fell for her. Immediately. I’ve never believed in love at first sight (sorry to my husband!) but I saw her and that was that.

“Luckily we were able to go and pick Smurf up just a day after reserving her, and once we got her carrier indoors, her little one-eyed face looked at us so worriedly! Smurf was affectionate and gentle from the start though, including with our child.

“When we first brought Smurf home, we could immediately stroke and feed her, though she needed a lot of time in a special corner, hidden behind my rowing machine! Several months later, she now loves climbing her cat tree to look at people and cats outdoors and express her opinion of them. She has also learned to get on the kitchen worktops and steals anything we leave out, she keeps us on our toes! 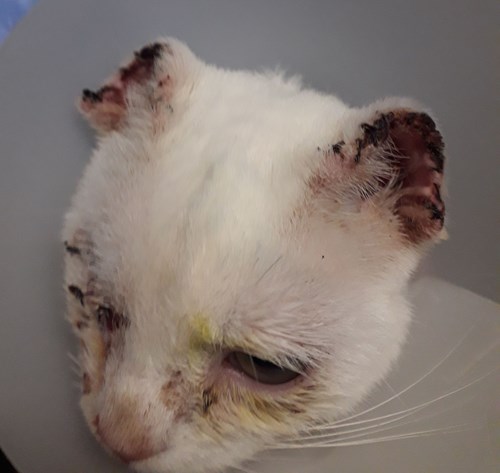 Smurf when she arrived at Belfast Adoption Centre, before her vet treatment

“I just don’t know what Smurf’s life was like before she arrived at Cedar Grove vets in late September 2020 but you’d have to assume she was either on the streets from birth, or was dumped on the streets. It’s a mystery.

“Sometimes I think about this and feel so sad for her because if she had had a loving home, she might never have lost her ears and eye. But pity doesn’t help animals. Rather than feel sad for what might have been, I try to celebrate the little person she is, and all the strength she has shown in overcoming severe illness. She has had to fight so hard for a decent life, so I just try to enjoy the pleasure of giving that to her.

“She has been through a lot and may always have quirks that other cats don’t, but we just enjoy every day that we have together and I’m glad we have been able to have her in our lives.”

Two other cats who have recently arrived in our care with sunburnt ears are Nigel and Fluff. 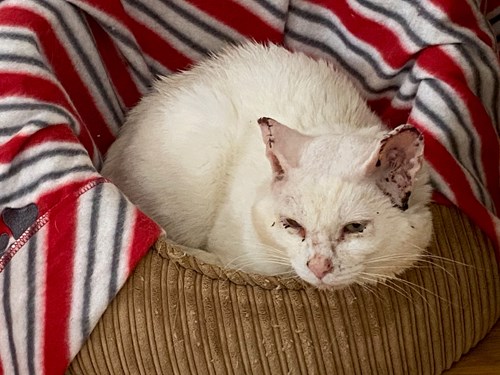 Nigel before his surgery to remove his ears

Nigel was brought to our Farnham, Camberley & District Branch in February after he had been hanging around a local neighbourhood and living off scraps of food put out for him.

Eventually one of the residents got him some help and the tips of Nigel’s ears were removed due to sun damage. Nigel was then looked after by our Mitcham Homing Centre and has since found a new home and been renamed Aapa. 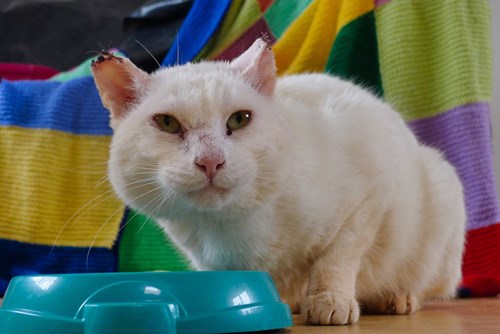 Mature moggy Fluff was brought to our Bridgend Adoption Centre after his owner could no longer care for him. His ears were sun-damaged and the tips had to be removed. He has now found a new home.

Bridgend Adoption Centre Manager Sue Dobbs said: “We are delighted that we were able to give Fluff a second chance and are so pleased to hear he’s settled well in his new home. We’d like to say a big thank you to players of People’s Postcode Lottery whose generous support helps us provide vital treatment and care for cats like Fluff.”

Central Veterinary Officer for Cats Protection, Sarah Elliott, said: “Cats are notorious for their love of lounging around in the sun but, just as with humans, this can be a very dangerous activity when the sun is at its hottest. Even on a cold day, when the sun is bright then there is still the potential for damage to occur. 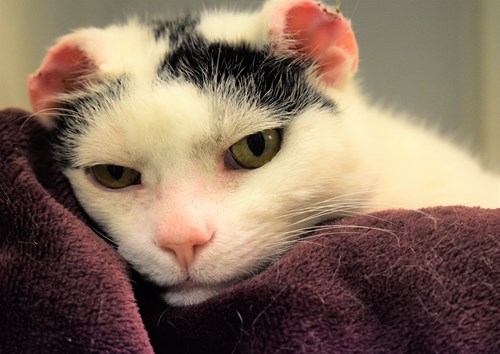 “Pale-coloured cats like Smurf, Aapa and Fluff are particularly at risk, or indeed any cats that have unpigmented white noses or ears.

“It may take a few years before the damage is visible but, once the early stages of cancer set in, cats require urgent veterinary treatment to prevent it spreading. However, following a few simple steps will help to protect pets from the sun.”

Tips for keeping your cat safe in the sun

Scruffy stray cat has both ears removed due to sun damage

Should I put sunscreen on my cat?

How to keep your cat cool in the summer