Poor tabby Walter's story highlights the danger of cat collars which are not quick-release.

This post has been written by our Colwyn & District Branch

Walter, a very handsome five-year-old tom cat, was found wandering the streets in October with his front leg caught through his collar. He was very timid and frightened and resisted all our efforts to trap him for four months. We even tried using a fox trap to no avail although we did succeed in catching a fox!

Eventually we got him into a basket and he was taken to the vet immediately.

When the collar was cut away under sedation, it revealed a very deep wound. 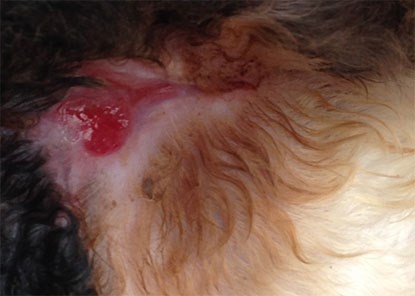 Walter's collar was too tight and cut into his skin

The experienced fosterer, Dorothy, decided to try to treat the wound, following the vet’s advice to use Manuka honey. We’re very pleased with the result – after six weeks of treatment the wound has becoming shallower and is healing well. 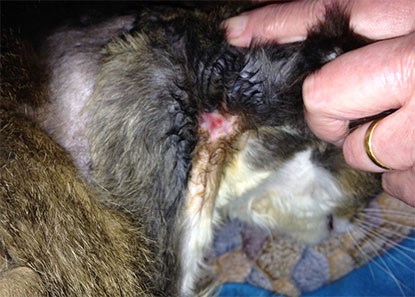 Veterinary grade Manuka honey is quite expensive so the leftover money raised for another appeal will be spent on this.

While he was trapped we scanned him for a microchip and contacted his owners, but unfortunately they didn’t want him anymore. When’s he’s recovered from his ordeal we’ll try to find him a new home. 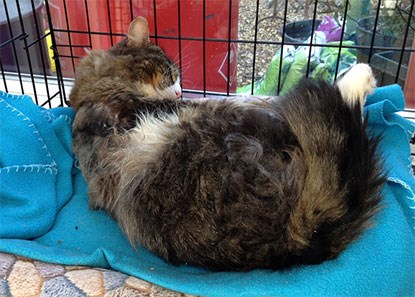 Walter’s plight highlights the danger of collars which are not quick release. If a cat strays and loses weight, the collar can become loose and it is then very easy for the cat to get a front leg through the collar when scratching.

Editorial note: If you do choose to put a collar on your cat, use a ‘quick release’ collar to allow your cat to free themselves should the collar get caught on something. Fit it carefully – two fingers should snugly fit between your cat’s neck and the collar.

We always recommend microchipping as the safest and simplest means of permanently identifying your cat.

If you'd like to support the Colwyn & District Branch in caring for Walter, you can donate here. Any funds raised over and above those needed for Walter will be used to help the other cats in the branch's care.