We meet our donkey volunteers at the National Cat Centre.

While we’re fanatic about felines at Cats Protection, you might be surprised to learn that the National Cat Centre is also home to some other animals that are not of the feline kind, which is why we’re celebrating World Donkey Day. It has been just under two years since we began our friendship with The Donkey Sanctuary, acquiring three gorgeous donkeys called Star, Holly and Twinkle. You might remember their arrival back in June 2016.

The donkeys have now settled well into their new home, quickly getting used to feeding time and even giving visitors a friendly ‘hee-haw’ as a morning welcome. Those that have got to know the donkeys the best, however, are the volunteers that dedicate their time to looking after the trio. We catch up with Kate, Marion and Gemma, who all take turns to look after the donkeys.

What does being a volunteer involve?

Gemma: There are different tasks depending on the time of day that you volunteer. The morning and evening shifts have more focus on mucking out, sweeping and feeding whereas the lunchtime shift is generally when Holly, Star and Twinkle are groomed and their hooves are cleaned.

There are three donkeys at the National Cat Centre. Do they all have differing personalities?

Kate: Holly is the larger, fluffier donkey and is generally more curious and approachable. Star has the lightest fur of the two smaller donkeys and is happiest when she is with her peer, Twinkle, who has the darker fur. She can be a bit warier of people and noises.

Gemma walking Holly around the field

Is there a reason there are three donkeys? Are they friends and do they get along?

Kate: The two smaller donkeys are already bonded and it was planned they were to come to the National Cat Centre together. Holly was a last-minute addition to ensure she would be within a group, as donkeys are pack animals. Occasionally there is a little head-nudging or kicking between Holly and Twinkle but other than that, they seem content living together.

Talk us through a day in the life of a donkey. What do they get up to?

Gemma: Donkeys like routine and even a small change to their usual behaviour could indicate that they’re unwell. They have their breakfast at around 8am while their morning volunteer cleans the stable and tidies up so they are ready for the day. Afterwards they’ll spend some time in the field, either munching on grass, rolling around, playing or interacting with visitors. Before lunch, they have their hooves cleaned and medicated if needed, before their coats are groomed. Afterwards, they’ll munch on straw or spend more time in the field before having their dinner at 4pm as the stables, yard and field are cleaned and tidied for the night.

What do the donkeys eat?

Gemma: They eat barley straw or oats and grass, sometimes with a fibre supplement. They need a strict diet as they traditionally come from dry climates where food is scarce and they would walk for long distances. As a result, too much fat-rich grass can lead to illness. Our donkeys are carefully monitored to ensure they eat the right things – their grass intake is limited to fencing which allows sections of grass to be made accessible to them as needed, while simultaneously stopping them from over-eating. 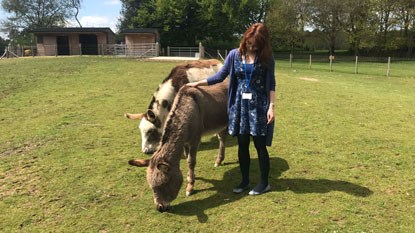 Gemma with Twinkle and Holly

How do you keep the donkeys entertained?

Marion: The donkeys have slow-eating straw bags which make them ‘work’ for their supper. They need to pull the straw through the mesh of these bags and it can take several hours for them to do it.  This is important to make sure that the donkeys don’t exceed their quota of treats for the day.
They also have logs in their field to nibble on, tyres with hidden apples, carrots or root vegetables and tree branches to chew on. There are also wellington boots filled with hay and hidden treats inside, plus turnips on a rope for a real treat!

We can often hear the donkeys being very vocal at certain times of day. What does this mean?

Marion: They know when it’s feeding time, usually 8am and 4pm. When they see someone around these times and are hungry for their food, they call to make sure we haven’t forgotten them and to make it clear that they’re waiting!

You’re obviously keen cat lovers too. What are the main differences and similarities between looking after donkeys and looking after cats?

Kate: The difference is that donkeys need daily grooming and hoof picking. The similarities are that they too enjoy affection, but this needs to be on their terms – just like cats!

Gemma: They both ‘purr’ when they’re happy. Donkeys blow air through their lips to show they are at ease and Holly also adorably trembles her lips when she has the top of her back massaged.

What is the best part of looking after the donkeys?

Gemma: It is lovely getting to know their individual personalities and rewarding when they are clearly happy. Spending time with them also provides a complete break from everything else – whatever is going on in the day can’t be taken to the donkeys because they sense how we’re feeling so we have to leave everything at the gate and focus solely on them. They’re a delight to be around.

Kate: The unusual opportunity to spend time with (and even hug) these fluffy, gentle, good-natured creatures with their big beautiful eyes.

Purrfect Landlords: Helping to give renters the chance to own cats