In September, four kittens were found dumped in a cardboard box on Ashdown Forest.

The kittens were just four weeks old when they were discovered by a dog walker, just a couple of days before heavy rain lashed the area. 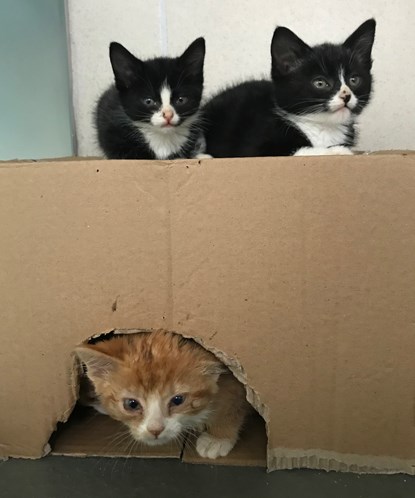 Karen and Kiri keeping watch while Kieran hides in the box

They were rushed to Cats Protection’s nearby National Cat Adoption Centre, where they were named Karen, Kieran, Keith and Kiri.

As well as being dehydrated and hungry, the kittens were all found to have deformed stumpy tails and Karen had an abnormally formed leg which it was thought may need to be amputated.

Tania Marsh, Deputy Manager of the National Cat Adoption Centre, said: “It was incredibly fortunate the kittens were found when they were, as they would not have survived much longer in the forest. 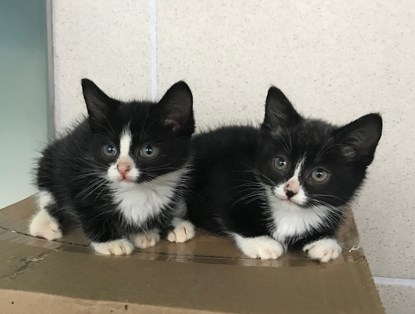 Karen and Kiri recovering from their ordeal

“They all have stumpy tails. We can’t tell how this has happened – it may have been in an injury, but it is more likely this is a congenital abnormality and the kittens were actually born this way.

“It’s desperately sad that these kittens were simply dumped, as they had no way to fend for themselves and would have certainly died if they hadn’t been found.

“It is likely they were an unplanned litter, which is the result of a cat not being neutered. Cats are prolific breeders, and can have up to three litters a year, so it’s vitally important that all cats are neutered to prevent unwanted kittens being born." 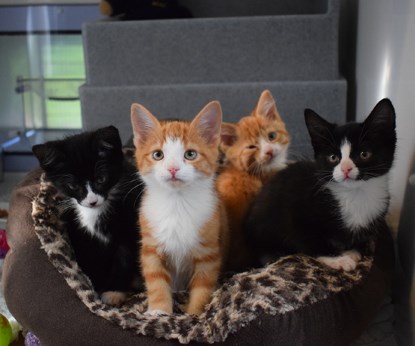 The kittens in the cosyness of the Cats Protection centre

Sadly it was found that Keith the kitten had extensive damage to his back legs that was so severe it was kindest to end his suffering and put him to sleep.

The other three kittens have now found their new owners and Karen even began to use her abnormally formed leg, meaning it did not need to be amputated.